You are here: Home › Biden’s Black And Hispanic Blocs Are Slipping Away 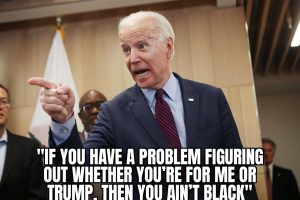 The Black and Hispanic bloc have consistently polled out in Democrat favor at 95/5 and 70/30 for decades. However, this election, this base seems to be slipping as amid widespread conversation on the Internet about Biden’s past as well as his current statements, Bloomberg reports there is very low turnout among the two blocs as well as rumors of increasing numbers among the blocs voting for Trump.

Senior officials on Democratic presidential nominee Joe Biden’s campaign are increasingly worried about insufficient Black and Latino voter turnout in key states like Florida and Pennsylvania with only four days until the election, according to people familiar with the matter.

The situation is particularly stark in Florida where Republicans currently have a 9.4% turnout advantage in Miami-Dade County, a place where analysts say Biden will need a significant margin of victory to carry the state.
More from Election

“I would like to see turnout increase – and yes, we need improvement,” Steve Schale, the president of Unite the Country, a pro-Biden super PAC, wrote in a blog post on Tuesday about Miami-Dade County early vote numbers.

Top campaign leaders have expressed confidence that Black and Latino voters will show up on Election Day – and historical trends suggest these groups often do prefer to vote in person. But some Biden advisers have expressed concerns about a lack of investment and are urging the campaign, so far unsuccessfully, to spend even more money to target these voters in the final stretch, especially given the campaign’s record-shattering fundraising.
Biden’s campaign disputed that these voter turnout efforts are being short-changed. (source)