You are here: Home › The Battle Rages On As Armenia Just Shot Down An Azerbaijani Ariel Vehicle Just 13 Miles Miles From Yerevan, While Azerbaijan Just Bombed Two Different Towns In Armenia

By Shoebat on October 1, 2020 in Featured, General

The battle continues to rage on between Armenia and Azerbaijan. Some noticeable events just recently occurred. Armenia shot down an Azerbaijani unmanned just 13 miles away from Yerevan (Armenia’s capital city). 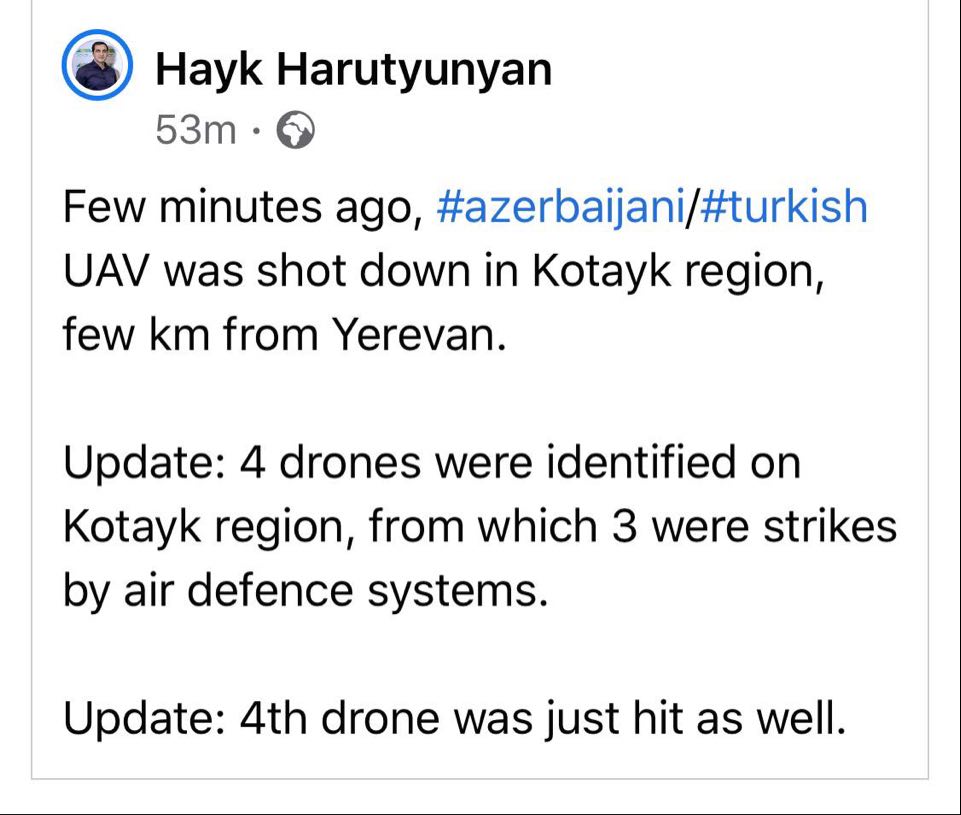 According to the Armenian publication, Aysor:

An enemy unmanned aerial vehicle was damaged by the air defense forces in the air borders of the RA Kotayk region. Ministry of Defense:

An enemy drone was shot down by the air defense forces in the air borders of the Kotayk region of Armenia, Shushan Stepanyan, spokeswoman for the Ministry of Defense, said.

Four of the adversary’s UAVs have appeared in #Armenia’n airspace above the provinces of Kotayk and Gegharkunik. Armenian air defense forces have already eliminated three of them. @NikolPashinyan

The adversary's UAV in #Kotayk region (very close to capital #Yerevan) was downed by the Air Defense Forces of #Armenia. #StopAzerbaijaniAggression

Meanwhile the government of Armenia is also reporting that two different Armenian towns, Shatvan and Mets Mastrik, were hit by Azerbaijani artillery, killing one civilian and wounding two others:

An Azerbaijani artillery strike on village of Shatvan in #Armenia’s Gegharkunik province followed by an Air strike on nearby town of Mets Masrik. One civilian was killed,two were wounded. Air defence units intercepted 3 other missiles, and shot down UAV responsible for the strike

This was also reported by the Armenian newspaper, Asbarez, which stated:

The same publication detailed that there were four drones which had infiltrated Armenian airspace in the provinces of Kotayk and Ghegharkunik, and that all four of them were shot down by the Armenian military. The Public Radio of Armenia also reported that “The air defense forces of Armenia have destroyed three UAVs in Gegharkunik region, including the drone that fired a missile at Mets Masrik.”  What is quite significant is that Armenia is a member of the Collective Security Treaty Organization (CSTO)—a Russia-led security alliance. Armenia could activate its mutual defense treaty with Russia, and thus could pull Russia to intervene in the conflict. Whether or not this could happen is yet to be seen. Viktor Biyagov, Armenia’s representative at the CSTO, has expressed concerned over Turkey’s involvement in the conflict, stating (as quoted by Armenia’s Foreign Ministry):

“We’re especially concerned by Turkey’s unconditional military and political support for Azerbaijan, which contributes to further destabilization in the CSTO responsibility area, and poses a serious threat to the peoples in the region. Turkish military specialists fight in the ranks of Armed Forces of Azerbaijan, and Turkish weapons are employed, including drones and military aircraft”

According to the New York Times, “Armenia has a mutual defense treaty with Russia but has not asked that it be activated because of the fighting.”

European News Magazine Reports: “Turkish Air Force F-16s Were Deployed Against Armenia And Shot Down An Armenian Military Aircraft”
Sure Enough, A Band Of Migrants Start To Walk Toward The US From Honduras
Follow