You are here: Home › Deepfakes: “I Told You So” 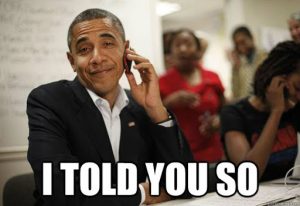 I am going to take a more informal tone as I write this piece, because I believe the story and the context to the story warrant such.

Some people like what I write. Some hate it. This does not concern me save for the essence of the message in question, since my purpose in looking at global, national, regional, economic, cultural, and social trends and more of all types is to help to give the greatest possible understanding of the world around us.

I am gravely concerned about many issues, and I have said that when the time comes, if there is a serious trend that I have noted that comes up, and for which I have received significant trouble for discussing it, I am going to note the story and respond with “I told you so”. It was my hope this would not happen, because many of these trends are about war, conflict, and other things that are not good. One does not want to be right if it means that another person may potentially be seriously hurt.

The time to make the statement has come.

Since January 2018, I have been aggressively warning about AI developments I saw as posing a grave threat to the integrity of reality around us. This was in the development of AI used for “deep fakes”.

The videos, released this week by RepresentUS, a non-profit and non-partisan group focused on political corruption, assert that the greatest threat to democracy is not foreign interference but instead voter suppression.

In the advertisement featuring the North Korean leader, viewers are warned that “if the election fails, there is no democracy.”

“I don’t have to do anything. You’re doing it to yourselves,” the fake Kim Jong Un says. “The people are divided. Your voting districts are manipulated. Voting locations are closing so millions cant vote.”
RepresentUs

“America, you blame me for interfering with your democracy, but I don’t have to,” the Putin character says. “You are doing it to yourselves. Polling stations are closing. You dont know who to trust. You are divided, There are strings we can pull, but we dont have to. You are pulling them for us.”

“This footage is not real, but the threat is,” a disclaimer at the end of both videos states. “Join us.”
Both videos include links to six steps viewers can take to help ensure the integrity of the 2020 presidential election.

“We created this ‘deepfake’ ad to show just how dangerous the attacks on American democracy are,” RepresentUS says. “The video was faked, but the message is real: If our election fails, our democracy will fail.” (source)

You can see the footage below.

It’s not hard for democracy to collapse. All you have to do is nothing. Find out the 6 things you can do to save the election at https://t.co/nW9EPPgGh7 #SaveTheVote

This footage isn’t real but the threat is. pic.twitter.com/n6tkrGY98X

Now it is clear that there are some ‘bugs’ that need to be worked out. However, it is the concept that matters most.

I have been warning about this for years. Instead, my research turned into a discussion about completely unrelated matters from people, because as I noted, this trend began in the adult industry, was driven by people in adult entertainment, and I said that it is a trend that must be watched because one of the most important lessons of history that I learned from the chair of a history department at a well-known university who is also a personal friend for many years, he said that what the adult industry adopts (or the equivalent in a society) will likely become a major social force at some point.

After having to defend myself from these accusations, I maintained that if these concerns were not addressed, they would move far beyond the adult industry because the trend is not about that segment of society, but rather how it is often a gateway to larger social changes. The concern isn’t about unclad women engaged in lewd behavior, but about a future where manufacturing evidence, destroying evidence, or creating false witness that WILL be used to exonerate the guilty, imprison the innocent, and start wars, and will become one in which the very fundamental means by which we understand and process reality and are able to distinguish between truth versus falsehood is inverted to the point of being useless.

Yet where are all the people who gave me trouble? What do they have to say?

I’ll wait for the haters to respond over the chirping of the crickets.

I warned about this trend. I said to be aware of it, but in typical (and often very American) style, the accents were focused upon rather than the broader message, and attempts were made to turn the message into the accents.

What good did it do? It accomplished nothing except to waste time, and now we are here with the process of subverting reality started, and to so much silence at a time when speech matters.

I told you so.

Half Of People Over 55 May Retire Poor
Major Medical Expert Announces: ‘Trump Is Most Likely Going To Survive Covid.’
Follow