You are here: Home › Half Of People Over 55 May Retire Poor 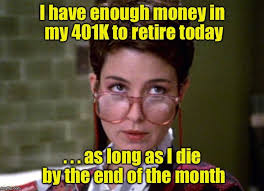 For many years, I have warned about a coming conflict between Boomers and their children, especially with Millennials who feel spited for having been left out of the party and their “credit card” in the form of social and economic future capital used to pay for a party now whose debts they will be responsible for. I have also warned that the effects of COVID-19 are going to be a lot more than just about the virus, but that the virus will have massive social repercussions because of the destruction that the response to it has done to the economy.

According to a recent study noted by MarketWatch, a curious fusion of Boomers and COVID-19 has come together, where the virus is forcing elderly people to tap into their finances so much that half of people over 55 may retire poor.

…economist Teresa Ghilarducci, a professor at The New School in New York City and one of the nation’s leading experts on retirement, told me that half—that’s right, half—of Americans aged 55 and up will retire in poverty or near poverty.

“Our data is showing that, because of the COVID recession, about 50% of workers over the age of 55 will be poor or near-poor adults when they reach 65,” she said.

How poor is that? “A person who’s 65 will be near-poor or poor if they’re living on less than $20,000 a year,” she told me. “I think we could all agree that means chronic deprivation for the rest of your life.” (source)

A lot of people are poor. As I have noted, about 44% of people earn less than $20,000 per year. This is just people who are in the work force and does not include those who do not work. As this already is, the situation is bad enough. While Boomers here are not per se working, the idea is that the income they have, while elderly people do not spend much money, is very low already. If we consider that many have bills that will increase (because old people get sick), then the situation is even more dire. The options are either a lot of sick people with nowhere to get treatment, or people going back to work who are elderly, which worsens the already bad jobs situation for many younger people.

It also would reverse decades of progress toward eliminating poverty among the elderly, from the Social Security Act of 1935 through Medicare in 1965 and beyond. As more people turn 65 and face poverty-stricken retirements, the fiscal and political implications could be enormous.

What’s behind this? People losing their jobs and health insurance because of COVID-19? Or losing the employer match on their 401(k) contributions? Or having to tap into retirement savings to cover daily expenses? “All of the above,” said Ghilarducci.

But it starts with job losses. “Older workers are losing their jobs at a faster rate, relative to younger people and relative to where they had been before than they were in the Great Recession,” she told me.

This is true, and the reason is because corporations- the very corporations that these people built up and instilled in firmly the contemporary eugenic mentality that prevails -are being forced out by their own underlings on the same logic. In the name of expediency, cost-cutting, outsourcing, and a whole other series of things done to the common worker, it is now coming back on the generation, which is largely Boomers.

The interesting part of this is that if one looks at the distribution of wealth, Boomers hold most at 57%. Generation X is next at 16%, and Millennials are almost at the bottom with 3%. The Zoomers are so low they are statistically irrelevant, and the rest of the money is tied up in trusts, corporations, foreign interests, and other investments.

Here is where it gets fun- the Boomers, love them or hate them, really are the “duct tape” holding the economy together by their spending because they are the only ones either with the cash on hand or credit able to do so. Without them, the entire economy collapses like a house of cards because they are the only ones putting “fuel” in the economic tank in the form of spending. This does not mean that Millennials, Zoomers, and Gen X are not spending. It means that they are not spending at the rates necessary to keep up the economy, for buying CBD oil and IPhone apps cannot compare with the effect of cars, motorcycles, and homes on economic stabiity.

Many of the Millennials know by very, very painful experience that not only can they never enjoy what their parents had, but that they are being forced into poverty. However, their only luxury is that because they were forced, they have a longer time to accustom themselves to it. Boomers, on the other hand, really have only a knowledge of above-average living conditions. This does not mean they are bad people, but as they are forced to descend economically because of COVID-19, since many have large savings or potential credit balances, the ‘descent’ can be softened by spending what money they have to make a better ‘landing’. However, this will be noticed by Millennials, who will naturally ask, upon seeing such spending, as to what will be left for them, and since many likely are aware of the answer, it may only fuel more rage against the Boomers.

This is one of the reasons why we must be so careful with the Boomer-Millennial rivalry. This is not simply an issue of ‘passing the torch’ to another generation and the conflicts that can come, which is a natural thing, but rather has the potential to be incited to serious violence, even within families and neighbors.

A report done by the New School Retirement Equity Lab found that over half of older unemployed workers may be forced into involuntary retirement. Nearly three million older workers have left the labor force since March and if the economic disruptions caused by COVID-19 continue, another million could join them soon.

“A total of four million people potentially pushed into retirement before they are ready will increase old-age poverty and exacerbate the recession,” Ghilarducci and her colleagues wrote.

“When older workers lose their jobs, they lose access to savings. They lose their employer’s contribution, and they face the temptation of drawing down their retirement assets,” she told me.

It is true that a lot of Americans are responsible for poor financial choices over time that result in bad behavior. However, as noted, a lot of people were forced into circumstances they did not expect, and many of them made decisions that they were told were good but truly were not. This has been exacerbated by the “all for me, nothing for thee” attitude prevalent in business and society, where while competition is OK and normal, it is supported by an unspoken adherence to darwinistic principles that result in the destruction of individual lives, first through finances, and if taken far enough, to potentially worse consequences.

This is one of the unexpected effects of COVID-19. It is pushing people into impoverishment that, realizing it or not, were already on the edge of it, and because of living conditions that force or encourage spending unless one is willing to take extraordinary measures to go against them that often results in social ostracism to some degree, then it is a cycle that forces a man into a position of slavery, except instead of a man with a whip riding a horse it is phone calls and letters from ‘creditors’ and ‘lawyers’ who forces him to continually work to repay a debt that cannot be repaid.

Likewise many Millennials do not care about the elderly, since they feel as though their inheritance was stolen, they want to take what they can get from them, and this again could be part of a larger trend towards the continual increase in discontent leading to possible violence against Boomers.

Has it really come to this—people being forced to choose between their physical and financial health? That’s what the virus and the reaction to it have wrought, and millions of people may have to live with the financial aftershocks for years to come.

I hate to say this, but there is a disturbing trend in the US that is part of this whole series of events where America is resembling, more and more, like nations where people cannot afford medical treatments. It is still in development, and there has always been a class of such people, but it is getting worse, and will not stop. One only needs to ask anybody who has worked with “volunteer clinics” how they have grown in numbers, presence, and visitors at each of such over the years because people are getting poorer.

Do not celebrate the decline of the Boomers, for all of the problems that they have, they are the last barrier before serious, and likely deadly, long-term change for the worse hits the country, lest a major event happens that alters the current trends that have been in the making for decades.

Former Major Leader Of The US Navy Reveals: ‘NATO Is Almost Certain Armenia Will Defeat Azerbaijan.’
Deepfakes: “I Told You So”
Follow