You are here: Home › Trump Still Hospitalized, So Far Is Doing Well 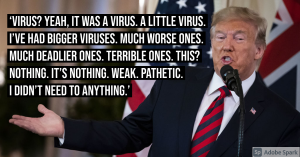 There has been a lot of talk about President Trump and his contracting COVID-19. In fortunate news, reports say that President Trump is “doing very well” per his physician on Saturday, where it was also noted that the president’s diagnosis came much earlier than apparently was initially reported by the White House.

At this time the team and I are extremely happy with the progress the president has made,” Conley said. “Thursday he had a mild cough and some nasal congestion and fatigue. All of which are now resolving and improving.”

But a source told reporters that there remains great concern about the president’s condition. (source)

It has also been noted by Trump’s medical team that so far, the President has neither a fever, nor does has he been hooked up to oxygen. These are good things, because both of the above conditions are associated with patients who get severe cases, and given Trump’s advanced age (he is over seventy), he is at an elevated risk for becoming an unfortunate death statistic. However, as Dr. Conley noted, he is “cautiously optimistic”, noting that Turmp is not on supplemental oxygen, and that his oxygen saturation, which is the level of oxygen in his blood, is at 96 percent, which is considered normal, and that he expects Trump not to be placed on oxygen in the future. Likewise, it has been reported that Biden has pulled all ‘attack ads’ against Trump, and that Trump has not transferred power to VP Pence.

But there are many questions from the public about him, such as the circumstances of his diagnosis, the severity of his symptoms, and how long he may have already had the illness. questions about whether Trump and the White House had misled the public, including his own supporters, about the circumstances of Trump’s diagnosis, as well as the severity of his symptoms. For example, given the time differences surrounding Trump’s announcement of his diagnosis, there is a possibility that Trump may have known he was infected as early as Wednesday, when he was speaking to a crowd in Minnesota filled with many people who were not wearing masks.

Now I cannot tell if Trump’s face and voice is being distorted by the wind, a possible illness, or something of both. One cannot be sure.

Likewise, another concern is Trump taking remdesivir, an antiviral drug, for the treatment for which there is no clear indication if it lowers the risk of death. There is also discussion of Trump taking the REGN-COV2 drug cocktail produced by Regeneron corporation, as well as is on aspirin, Vitamin D, and zinc supplements. While it does seem that he is doing well, some people are wondering if Trump will survive. It is my opinion that he will, and that there is a strong chance that he will likely emerge stronger from this in terms of his polls and support.

There is talk that there may be election day violence, but if this happens, especially if it comes from Democrats or Democrat-affiliated groups, this will also only help Trump.

Right now, it is important to watch Trump and his health. But perhaps, this is the ‘October surprise’ that we have been warning may happen in some way, and given that Trump survives- just has Jair Bolsonaro and Boris Johnson have -there is little that can be said that would be a downside for him.

With one month left until the election and the practical climax of this season’s election year drama at hand, it is going to be very interesting to watch the outcome on election day. However, so far, the main signs seem to indicate, in spite of popular polling, a favor for Trump to win. If he does win, then the Republicans should enjoy the next four years and try to do as much as possible, since there is a chance it will mean that in 2024, when Trump leaves office, his replacement will likely be a Democrat so long as current long-term trends remain constant.

Remember When Donald Trump Told Biden He’ll Have A Vaccine In A Matter Of Weeks? Well Now Trump Has Been Given Medicine For Covid And His Health Is Already Improving
The Prime Minister Of Armenia Makes This Declaration To The Whole World: ‘Turkey Wants To Conquer Armenia And Continue The Armenian Genocide.’
Follow