You are here: Home › Iran Declares Her Support For Turkey In Nagorno-Karabakh Conflict Amid Allegations Of Supporting Armenia 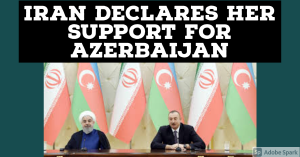 Shoebat.com has covered in the past how Turkey and Iran, while historically fighting with each other, have also worked together, and how in modern times, Iran has shown open support of Turkey and her aspirations, much to the dismay of Saudi Arabia. In light of the current fighting in Nagorno-Karabakh between Armenia and Azerbaijan, the latter who has been openly supported by Turkey, Iran has now declared her support for the Azeri-Turkish side as Radio Farda reports.

In an unprecedented move, the representatives of the Iranian Supreme Leader Ayatollah Ali Khamenei, in the provinces of Ardabil, East Azerbaijan, West Azerbaijan, and Zanjan, have issued a joint statement supporting the Republic of Azerbaijan.

“There is no doubt that Nagorno-Karabakh belongs to Azerbaijan and its government’s move to recapture the region is completely legal, according to Shari’a, and in line with four Resolutions of the United Nation’s Security Council,” Khamenei’s representatives have asserted.

“The Azerbaijani government has acted in a completely legal and religious manner in recapturing these lands and has implemented four UN Security Council resolutions,” they wrote in their statement on Thursday.

Three decades ago, Nagorno-Karabakh was occupied by Armenia, along with seven other Turkish-speaking areas. Since then, the UN Security Council has issued four resolutions calling for returning the lands to the Republic of Azerbaijan.

Apart from Armenia, no country has recognized these lands’ occupation and the self-proclaimed government of the “Republic of Artsakh.”

Last Saturday morning, widespread clashes between Azerbaijani and Armenian forces began in Nagorno-Karabakh, and both sides rejected calls for a ceasefire.

The joint statement of Khamenei’s representatives in the Turkish-speaking provinces of Iran seems to be in coordination with Khamenei’s ‘beit’, or office, to console the Republic of Azerbaijan.

“Unfortunately, the enemies of the relationship between the two friendly countries (Iran and Azerbaijan) have recently raised a clamor under pretenses and accused the Islamic Republic of betrayal (against Azerbaijan),” the statement said, warning against the “enemies’ psychological warfare.”

Furthermore, the statement referred to the Azerbaijani soldiers killed in the Nagorno-Karabakh conflict as “martyrs of the great nation of Azerbaijan” and wished them “heavenly high ranks.”

However, in recent days, Iran has been accused of assisting Armenia in its conflict with Azerbaijan.

Images are circulating on social media of allegedly Russian trucks carrying arms to Armenia via Iran.

Meanwhile, the state-run Mehr News Agency (MNA) reported on Friday, October 2, “Above twenty mortar shells from the military conflict between Armenia and Azerbaijan over the Nagorno-Karabakh region have hit Iran’s Aslandoz region in northwestern Ardabil province.”

Since the start of the military conflict on Sunday, numerous mortar shells have hit the Iranian soil. Iran, the European Union, Russia, the United States, and several other countries have called for an immediate ceasefire in Nagorno-Karabakh. (source)

It would not be out of the ordinary for Iran to support Armenia, since a lot of Armenians live in Iran.

In the whole situation, Iran is in a very dangerous situation, and she must be very careful.

The trend to watch for here is not even so much the conflict, but the fallout from the conflict, since this area is geopolitically important for oil reserves for Russia and has been since the 1850s. It was the reason why Germany twice, in World War I and World War II, attempted to capture and hold the area, and what culminated in the horrific Battle of Stalingrad in 1942.

From this, we can pull two trends to monitor- the effect this has on the expansion of Turkish power, and the expansion of oil pipeline and oil-related railway lines being built from Turkey under the Caspian Sea and across Iran to Central Asia, because these two will be critical in determining the victor in a third major global conflict.