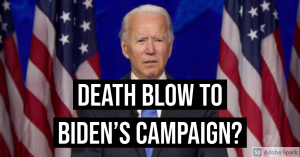 There are certain things that one does not do, such as to wish death on somebody who is sick. However, as many news reports are communicating, including Townhall.com, a recent statement from Biden about a “death blow” has some talking if he meant this as a misspeak about something else, or an intentional wish on the President in the hospital recovering from COVID-19.

Joe Biden’s campaign said they would pull negative ads upon news that President Trump had tested positive for coronavirus and was being admitted to Walter Reed Medical Center. I mean, they can, not because this was done out of the goodness in their hearts, but because their allies in the media can do all the attacking for them during this hiccup in the 2020 election cycle. Also, it’s not true that the Biden camp yanked all their negative ads (via Fox News):

“Despite pledging to stop his negative advertising, nearly 100 negative Biden ads slandering the president and lying about his record have aired today while the president is at Walter Reed,” Andrew Clark,Trump 2020 Campaignrapid response director, told Fox News on Saturday. “Meanwhile, Joe Biden has continued to attack the president in his speeches.”

Biden’s campaign said it’s not as easy as flipping a switch to pull down all negative ads nationwide across hundreds of TV stations. It may take a day or so for the ads to be fully removed from the rotation, but Biden is committed to doing so, the campaign added.

Another issue is one of those ads running Saturday wasn’t deemed negative by the Biden campaign, but rather factual.

Well, it didn’t stop there. Apparently, Joe Biden decided to elaborate to his tens of followers about Trump being delivered a “death blow” as he battles his infection. You know, maybe Joe misspoke, maybe he didn’t. The two men obviously do not have a lot of love for one another, but Sean Davis of the Federalist aptly noted that this little stump bit was “disgusting,” to say the least. The good news is that Trump won’t wither like Mitt Romney. He’ll fight back. His team is already on this—and they’ll deliver a nice counterpunch soon. (source)

Now there are a lot of questions to be asked about Trump’s infection, especially since there have been more than a few curious observations about the circumstances. That said, from a politial perspective, what Biden’s campaign did was not a “death blow” to Trump, but to his own campaign, for while it seems to be a misspeak, it will be used by the Trump campaign against him.

This does not bode well for Biden, because Trump will come back, likely recovered, and say that Biden ‘wanted him dead’ but he ‘survived’, and he will be able to use the popularity and controversy generated from it to most likely get four more years in the White House.

Christian Armenia And Muslim Azerbaijan Are Now At War. Azerbaijan Just Bombed An Armenian Neighborhood And Soldiers Are Killing One Another As The United States Does Nothing And Turkey Is Using The War To Revive Its Own Empire
The Prime Minister Of Armenia Warns: ‘Turkey’s Mission Is To Reestablish The Ottoman Empire In The Caucasus. The Syrian Rebels That Turkey Sent To Kill Armenians Are Harassing Villages And Beginning To Impose Sharia Law In The Region.’
Follow