You are here: Home › France Rips Into Turkey Over Support Of Azerbaijan, Backs Armenia 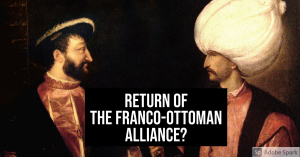 With the US absent amid her own election and Russia curiously silent but certainly watching the situation, Armenia and Azerbaijan continue to tear into each other, and amid all of this, France has thrown herself into the mix as the nominal Turkish ally has ripped into Turkey over her support of Azerbaijan and publicly given support to Armenia according to the Daily Sabah.

The resumption of deadly fighting between Azerbaijan and Armenia has turned the international community’s attention to the Organization for Security and Co-operation in Europe (OSCE) Minsk Group, which is tasked with solving the crisis and on which the international community relies to steer both countries toward a path to peace. Yet, while Russia’s silence has been deafening and the U.S. has been widely absent, France has fanned the flames of conflict through statements of support for Yerevan and accusations toward third parties instead of providing a solution.

“The behavior of French President (Emmanuel) Macron and Russia, in general, has surprised many observers of the Nagorno-Karabakh conflict over the past week. As for the French president, he seems to be continuing his anger toward President (Recep Tayyip) Erdoğan and Turkey that first began to surface last year around October,” Matthew Bryza, a former U.S. co-chair of the Minsk Group and former U.S. envoy to Azerbaijan, told Daily Sabah.

Bryza noted that relations between the two NATO allies soured when Macron called the transatlantic alliance “brain dead” after U.S. President Donald Trump seemed to accept Erdoğan’s request to move Turkish troops into northern Syria in an operation to secure its border from terrorism.

“Since then, Macron has been highly critical of President Erdoğan and Turkey, whether it be in Syria, Libya or the Eastern Mediterranean and now Azerbaijan. His full tilt toward Armenia makes it very difficult if not impossible for France to remain an impartial mediator as a co-chair of the Minsk Group. So, the Minsk Group is in big trouble,” Bryza said.

Macron last week voiced support for Yerevan in Latvia’s capital Riga during a visit to the Baltic European Union state, saying, “I say to Armenia and to the Armenians, France will play its role.”

Speaking to Daily Sabah, journalist Sevil Nuriyeva Ismayılov said that there is a plan by France to pull Turkey into the events through Armenian Prime Minister Nikol Pashinian.

“In such a plan, Armenia will occupy new territory, and this violation will be met with anger by Turkey and lead to Turkey’s response, which would be opposed by Russia and result in a clash between Moscow and Ankara despite consensus on Libya and the Eastern Mediterranean,” Ismayılov pointed out, describing this as France’s strategy.

She suggested that France believed Turkey and Russia would confront each other, yet has been met with Azerbaijan’s statements insisting on Ankara’s presence at the negotiating table as a principle condition. “As Ilham Aliyev underlined on Monday, there is no way that Azerbaijan will sit down with anyone without Turkey,” she said.

The trio late Monday stated that the escalating conflict between Armenia and Azerbaijan over the occupied Nagorno-Karabakh represented an “unacceptable threat” to the region’s stability.

The three countries’ foreign ministers in a joint statement condemned “in the strongest terms the unprecedented and dangerous escalation of violence,” adding that attacks allegedly targeting civilian centers “constitute an unacceptable threat to the stability of the region.” (source)

The above allegations of a possible ‘conspiracy’ by France with Turkey in this is not an unreasonable proposition. The French have done with before, such as with the wars of religion in Europe during the 16th and 17th centuries, where the French government would verbally support the Catholic Church, and even provide material support to her in her neighboring countries, but internally would support Protestantism and even leave Protestant revolutionaries alone as a hedge against the Church. This was at the same time that they were also backing the Ottoman Empire in their wars against Christians as a part of the Franco-Ottoman alliance, which was a huge matter, since the French were supporting Muslims in their wars against Christians or doing not a thing to stop them from their attacks, and all in the name of politics. It bears a disturbing resemblance to US policy in places such as India, where the US will speak about ‘reigious freedom’ and ‘Christian persecution’ in certain nations, but ignore it in India, which has become a major persecutor and is threatening genocide against many Christians, and the US stays silence because of her alliance with India against China.

There may be a lot more here, but given the trends of France to stay one thing and do another when it comes to geopolitics and policy, it will be to watch Turkey’s response and with that, not France’s words, but her response to Turkey to see if she genuinely cares for the Armenians or is using historical patterns of behavior again.