You are here: Home › Corner Store Owners Beg To ‘Re-fund The Police’ After Machete Attack 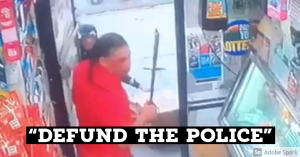 With the rising trend of national violence coming at the same time of calls for “defunding” the police, not all people agree, because while police abuse is real, fallen human nature is also real and is a reason why the need for police exists.

A group representing “bodega” (a term used for “corner stores” commonly found in Puerto Rican Spanish) owners is calling to ‘re-fund’ the police after a bodega owner in the Bronx was attacked in his store by men with machetes.

Disturbing video captures the moment two groups of machete-wielding men do battle int he doorway of a Bronx bodega, with two of them desperately trying to fend off a larger group that chased them into the store.

Two separate clips released by the United Bodegas of America early Tuesday show the attackers hurling items at the door as the duo inside attempt to defend themselves — with one waving a machete and the heaving a candy dispenser as a makeshift maul.

During the fracas, one of the men inside the store was slashed across the eye and forehead before cops and an ambulance arrived, according to the coalition of bodega owners.

The incident happened on Sunday around 5 p.m. at the Colorado store at 158 Gerard Ave. in the South Bronx.

Fernando Mateo, a spokesman for the bodega owners group, said clerks in the store were forced to hide behind the encounter while the melee played out at the store’s entrance.

He said it’s an example of the violence plaguing small businesses in the Big Apple.

“We are small businesses that are trying to invest our money in this city, and as you can see the gangs have taken over,” Mateo said at a morning press conference Tuesday.

“You know, there’s very little that we can do to defend ourselves,” he said.

Mateo said the latest incident at the Bronx bodega had prompted to owner to flee town with his family, fearing reprisal from local gangs.

“The owner of Colorado bodega is a family man, married with five children, ages 1 to 21,” he said. “He picked up his kids and he left town last night because he’s fearful for his life. He’s fearful that something is going to happen to him because there will be arrests made, which he has nothing to do with.”

In a statement released earlier, Mateo said “someone could have died,” and called it a “lucky day for the two victims who ran into the bodega.”

The footage shows one of the men who fled into the store, wearing a red T-shirt, slashing back as the group of attackers try to get into the store.

Mateo did not provide details on the extent of the man’s injuries.

“Mayor de Blasio must refund the police,” the statement said. “We need public safety in our hoods, we pay for that protection and we are not getting it. Too many victims, too many killing, too many crimes committed in NYC, this must END.”

Radhames Rodriguez, president of the coalition, compared the attack to the heinous caught-on-camera June 20, 2018 machete and knife killing of 15-year-old Guzman-Feliz after he was dragged out of the Belmont store in a case of mistaken identity.

“We are nervous and afraid, these machete attacks bring us back two years when Junior was killed and the bodega owner was blamed for his death,” Rodriguez said. (source)

This is another reason that works to Trump’s favor, as he is able to maintain the perception of law-and-order. By contrast, Biden has been able to be successfully associated with chaos and disorder by Trump and his campaign. As a result, incidents such as these work to Trump’s favor, thus building on the current political climate.

France Rips Into Turkey Over Support Of Azerbaijan, Backs Armenia
Prepare For The Next Coming Great Jihad As Russia Warns That Azerbaijan Could Become The Next Center For Islamic Terrorists To Travel To Fight And Kill Christians
Follow