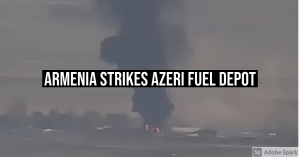 As tensions mounted between Armenia and Azerbaijan, Azeri President Ilham Aliyev responded to Armenian threats of bombing oil pipelines by saying that she would attack the Matsamor nuclear plant in Armenia in retaliation if that happened.

Armenia has denied attacking any oil pipelines, but recent news from the Caucasian Knot reports that Armenian troops have attacked and destroyed and Azeri base and fuel depot.

During the offensive near the city of Jebrail, a large Azerbaijani base of fuel and lubricants was destroyed, but the oil and gas infrastructure was not fired upon, the Armenian Defense Ministry said. Baku called false information about 60 Azerbaijani soldiers killed in the Jebrail region.

The Armenian armed forces struck in the southeastern direction of the front line, in the area of ​​the city of Jebrail (Jrakan), the press secretary of the Armenian Defense Ministry Shushan Stepanyan wrote on her Facebook page . “As a result of targeted fire of Armenian units <…> a large base of the enemy’s fuel storage was damaged,” she said.

According to Stepanyan, 60 dead Azerbaijani soldiers remained on the battlefield, as well as 22 units of damaged and dozens of units of serviceable equipment. Stepanyan posted on social media a video showing a photo of dozens of trucks on a highway in mountainous terrain, followed by a video of a large fire with a tall mushroom-shaped column of black smoke.

The Azerbaijani Defense Ministry has denied the reports of the Armenian side about losses in the Jabrayil direction. “We officially declare that the information disseminated by the Armenian side is unfounded and false. In the direction of Jabrail, our army is successfully continuing its counter-offensive and has superiority over the enemy,” the “Caucasian Knot” correspondent translated the message of the military department.

Jrakan (Jabrayil) on the map of Nagorno-Karabakh. https://www.kavkaz-uzel.eu/articles/354792/On October 4, Azerbaijani President Ilham Aliyev announced the return of control over the city of Jebrail and several villages of the Jebrail region. At the same time, the press secretary of the Armenian Defense Ministry Shushan Stepanyan stated that this is “another lie”.

On October 6, the General Prosecutor’s Office of Azerbaijan announced an attempt by the Armenian military to launch a missile strike on the Baku-Tbilisi-Ceyhan (BTC) oil pipeline in the section passing through the Yevlakh region. “The attempt was thwarted,” the ministry said in a press release.

The representative of the Armenian military department stressed that the goal of damaging the oil and gas infrastructure is not set for the military. “However, regardless of the location, all those military objects and targets from which fire will be fired in the direction of Artsakh (Nagorno-Karabakh – note of the” Caucasian Knot “) will be destroyed,” she said. (source)

It will be interesting to see the response coming from Azerbaijan.

Here It Begins: Accusations Fly That Azerbaijan Is Recruiting Terrorist Fighters From The Ukrainian Neo-Nazi “Right Sector” And “Azov” Groups
Syria, Turkey, Armenia, Azerbaijan, And The Pursuit Of Empire
Follow