You are here: Home › Here It Begins: Accusations Fly That Azerbaijan Is Recruiting Terrorist Fighters From The Ukrainian Neo-Nazi “Right Sector” And “Azov” Groups 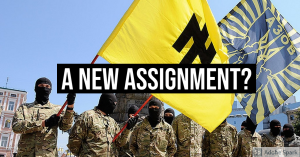 There has been talk that Azerbaijan, given her strategic importance for oil, tight military alliance with Turkey, past history as a former Soviet occupied nation, and her location as a bridge between Russia, Turkey, the Middle East, and Central Asia, could see a major rise in terrorism as the Turkish-allied country might become a “stepping stone” for terrorists, backed by Turkey and even NATO, into Central Asia. According to Russian and Armenian news sources, this may be coming true, as various reports (all Russian) say that Azeri President Ilham Aliyev has started recruiting fighters from the Ukrainian Neo-Nazi “Right Sector” and “Azov” groups currently fighting Russia in Donetsk, Luhansk, and the Crimea regions.

According to Russian military commander Semyon Pegov, Azerbaijani President Ilham Aliyev has announced the start of recruiting terrorists from the Ukrainian extremist gangs “Right Sector” and “Azov”. The journalist’s telegram channel on Wednesday, October 7, specifies that the recruitment takes place in Odessa.

Basically, the recruitment of militants is carried out in the Azerbaijani diaspora of the city of Odessa. Recruiters from Baku give preference to the “Azov” and “Right Sector” militants, who have a bloody combat past in the trenches of Donbass. It is also specified that for participation in hostilities against Nagorno-Karabakh, each militant was promised from 1.5 to 2 thousand dollars.

As you know, earlier it was suggested that [Aliyev] would send Ukrainian neo-Nazis to the trenches of Artsakh, many sources suggested such an insider. Now the inside information has been finally confirmed. It should be reminded that the conflict between Azerbaijan and NKR flared up with renewed vigor on September 27 this year, shelling and clashes have been going on for more than 10 days. (source)

There is a lot of disinformation on both sides, so it is objectively difficult to get clear information. That said, the fact that the possibility of this was raised and now the Russians are accusing Azerbaijan of doing exactly this is concerning and must be watched carefully.

It is not unreasonable to expect this. With it being between 900 to 950 miles from either Donetsk or Luhansk to Baku, the capitol of Azerbaijan, it is the equivalent of a drive from San Antonio to Phoenix. To add more perspective on this, consider how there is a migrant caravan heading to the US right now from Honduras. If we calculate the distance from Tegucigalpa, the capitol, to the American port city and major border crossing point of Laredo, Texas, which is right on the US border, it is about 1708 miles, or almost double the distance from points east in Ukraine to Baku

The trip can me made in a day or less. It is not very far by auto standards. As such, getting to such a location is not a problem for the motivated.

The small nations and “quasi-nations” (Chechnya, Dagestan, Ingushetia, etc.) are all known for being used in proxy wars between major powers. But with conflict in Azerbaijan exploding and a trend in progress already indicating a rise of nationalism and a return to war on the European continent,  this could lead to a larger war and may be the trigger for something worse, now or in the future.