You are here: Home › Report: Expect Masks For Years To Come 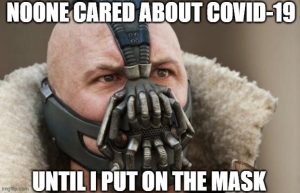 With the spread of COVID-19 and the push for masks, regardless of what one thinks, the concept of ‘masking’ is a global and long-term trend that is not going away. According to one representative from the Spanish National Research Council, as far as Europe and Spain are concerned, it may be for years that people are required to wear masks.

Margarita del Val heads up a cross-disciplinary initiative by the Spanish National Research Council (CSIC) — Salud Global/Global Health. She has been urging the entire region be restricted — 45 municipalities had been before the latest moves, which led to accusations of punishing the poor due to the locations of the most heavily affected areas.

Del Val said Madrid needs better quarantine control and contact tracing, and that it lacks the health-care officials to do this. The government recently announced that police would be able to access health department data to help enforce quarantines on individuals, while the Spanish army was drafted in August to help with contact tracing in parts of the country.

Del Val also zeroed in on heavily congested public transport — social media is filled with complaints about crowded buses and trains, specifically in areas that are seeing sharp rises in cases.
Ramos

“Public transportation has to be safer and making it safer means having more trains and buses…so that they are not so full. Also trying to have start times — at different companies at different times, so that we don’t have the rush hour, which is highly concentrated,” she said.

As well, del Val said people living in the most highly affected areas of Madrid need to be supplied with clean masks each time they enter the metro. “Some people cannot buy surgical masks everyday and they’re using the low quality masks and they are not so effective for them or for others,” she said.

She also urged hotels to reopen for people with symptoms, to prevent workers living in cramped conditions from spreading the virus. A network of hotels opened up in the first wave of the pandemic, and those establishments are underused now that summer has ended, said del Val.

Restaurants remain a big concern for del Val, especially as the warm weather leaves, and she predicts a “huge problem” with indoor drinking and eating, even with capacity cuts to 50%. Summer outdoor dining was also problematic, she said.

“I think when people were eating and drinking outside, which was taking one measure, open air, which is good, they were forgetting a second measure…either distance or masks,” or limited contact, she said.

Spain also had a problem with “national tourism” in the summer that brought too many people together, often families, who didn’t keep safe distances when they should have. Going forward, she said, theaters, which offer decent venting and where individuals wear masks and speak little, may have an edge over restaurants.

“We are all heroes,” reads a statue dedicated to health-care workers in Madrid’s Plaza del Callao, Oct. 1, 2020.
In the end, said del Val, no one can count on one single measure, but lifestyle changes will be required. “We have to get used to wearing a mask and taking a couple of measures for a couple of years, and integrate them into our daily lives, forget about them, they will turn into something that is useful to you,” she said.

As Shoebat.com has noted, the trends toward militarism in Europe have been influenced by the economic effects of the pandemic. Wearing masks for years assumes that the pandemic will continue for years, which also means more years of economic decline, and more tendencies towards nationalism and militarism as a response.

Ultimately there is one future this is leading to, and that is war.