You are here: Home › Tens Of Thousands Of People Have Disappeared From Mexico With No Trace 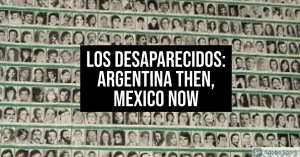 Many people associate deaths, abductions, or disappearances with places such as the Middle East. However, the neighboring country of Mexico has become infamous for this as tens of thousands of people have disappeared in the nation without a trace.

They’re known as los desaparecidos — those who have vanished without a trace. And their numbers are larger than the entire populations of such California cities as Redlands, Davis or Lake Elsinore.

Family members and others say Mexico’s staggering roster of missing persons reflects at least official indifference on the part of authorities, and in some cases, complicity.

The most high-profile case is that of the 43 young male students from the Ayotzinapa Rural Teachers College, a small college in southern Mexico with a tradition of left-wing activism. On their way to a protest in Mexico City, the group disappeared from Iguala, Guerrero, in September 2014, after a confrontation with government security forces, who were acting in concert with local politicians and organized crime, according to Mexico’s federal government.

In June 2020, Reforma reported the Attorney General of Mexico announced the arrest of the cartel leader who allegedly ordered the students’ assassination. Arrest warrants were issued this week for local police, federal police and members of the army, according to Mexico News Daily.

Most of the victims’ remains were never found. But the search for the missing students in the rural hills of Guerrero turned up hundreds of other bodies, inspiring people across the country to form loose political and social alliances and search for the remains of their own missing loved ones.

In Tijuana, that movement predates the Ayotzinapa case.

One father’s desperate search for his kidnapped son in 2007 led to the discovery of abandoned properties where a Tijuana bricklayer named Santiago Meza, also known as “El Pozolero,” dissolved as many as 650 bodies in caustic acid for the Arrellano Felix cartel. He left their remains — mostly just tiny fragments of bones and teeth that did not dissolve in the acid — in partially-constructed houses he worked on as a mason.

“We had to do the hard work of converting ourselves into investigators not for our own will, but forced by circumstances, when the authorities did not do their proper job. We had to enter (the properties) ourselves, apart from authorities, to discover these units,” said Fernando Ocegueda, the father who discovered the properties and founded the group United for Baja California’s Disappeared, which organized a dozen different parent collectives.

Since then, family members have been risking their own safety to search for their missing relatives in Tijuana. They form into groups both for protection and for political purposes, so as to lobby state officials in greater numbers. (source)

There are many reasons why this could have happened. However, based on our observation of the trends concerning violence and political instability, there is a strong chance it is tied to drugs or the drug wars, which have destroyed Mexico and turned her into one of the most violent places on Earth.

The continued disappearance of people combined with economic problems, political insecurity, and a fear of one’s life are all trends that suggest not an increase, but rather constant flow of migrants to the US. This is a long-standing trend that has been around for decades, and while there have been temporary decreases, is likely not to have a long-term decrease simply for the point that as long as there is violence, people disappearing, and a need for work, there will be people who want to escape and will make the trip to the US.

As far as a decrease in the actual situation of the violence, that is yet to be seen, but the trends for migration would seem to remain constant. The question is, what will be the US response for the future?