You are here: Home › Was A Catholic Priest Just Caught In A Bizarre, Blasphemous Ritual In Church? 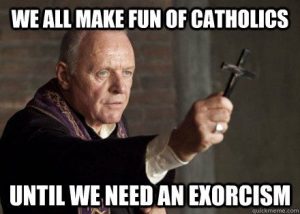 There are many good priests, but there are also bad ones, and they can cause a lot of problems. Such happened recently when a priest in Louisiana was arrested after he was caught in a bizarre ritual involving prostitutes and blasphemy on the altar in a church.

The lights inside Saints Peter and Paul Roman Catholic Church in Pearl River were on later than usual on Sept. 30, so a passerby stopped to take a closer look.

Peering inside, the onlooker saw the small parish’s pastor half-naked having sex with two women on the altar, according to court documents. The women were dressed in corsets and high-heeled boots. There were sex toys and stage lighting. And a mobile phone was mounted on a tripod, recording it all.

The eyewitness took a video and called the Pearl River police, who arrived at the church and viewed that recording. Officers then arrested the Rev. Travis Clark, pastor of Saints Peter and Paul since 2019, on obscenity charges.

The Archdiocese of New Orleans announced the priest’s arrest Oct. 1 but would not give specifics about why he was arrested. Nor would the police.

Dixon and Melissa Cheng, 23, were booked on the same count as Clark, 37. Police said the charge stems from from “obscene acts [that] occurred on the altar, which is clearly visible from the street.”

The church is vague on the specific acts that would constitute a desecration, but the Code of Canon Law says a violation of a sacred place occurs “by gravely injurious actions done in them” that are “contrary to the holiness of the place.”

That description appears to apply to the alleged tryst as outlined by police in documents filed in Louisiana’s 22nd Judicial District Court in Covington.

On Sept. 30 just before 11:00 p.m., an unidentified person was walking by the church on St. Mary Drive and looked inside through windows and glass doors because the lights were still on. Police allege that the person “observed and had video of Ms. Cheng and Ms. Dixon” using plastic sex toys while engaging in intercourse on the altar with Clark, who was still partially wearing his priestly attire.

The person called the police to the church. Officers arrived to see two women clad in corsets and high-heeled boots by the altar, with “lights set up around them as if they were filming some type of event,” the documents said. (source)

It is a known trend throughout history that people have gone into the Catholic priesthood who were evil for the purposes of doing evil, or that some men who may have entered with good intentions ended up doing very bad things.

It is easy to write this off as simple degeneracy- and it may be this. However, this trend of infiltrating ‘from within’ has been noted by shoebat.com, such as with a network of nuns uncovered involved in the occult.

After all, while there may be people who for their own personal “kicks” would do such a thing on the altar, it seems more aligned to that of a ritual of sorts, and this is more pronounced by the ‘film-like’ quality of the event. Given the problems with homosexuality and open links to the occult operating among the clergy in Rome, it gives one to wonder if perhaps what happened here was something of deeper significance than what it appears.

We know for a fact that priests have been involved in bizarre demonic activity in the current times (see examples we have noted here and here). Why would it be a surprise if this was another case?

With the world moving away from God and towards evil, with religion and the practice of religion in serious decline, and the problems in the Church, it does not boden well for the world, for when trends like this take place, they always point to the same end, which is destruction that often manifests through war.

The Medicine That Trump Took To Cure Him Of Covid And That He Praised As A Gift From God Was Developed With The Cells Of Aborted Fetuses
Putin Veritably Declares Support For The Democrat Party, Says There Are Many Common Values Between The Democrats And Communism
Follow