You are here: Home › US National Debt Will Exceed The Size Of The Economy 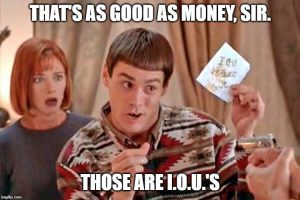 One of the points that I have constantly emphasized as a major trend for the future is the growth of the national debt against the size of the economy and the ability to service debts. This is going to have severe consequences for the national and as a result due to the position of the dollar, the world economy.

I have been very clear on Shoebat.com that the governmetnis being forced to acknowledge this reality, and likewise, to note that it only has one tool to deal with it- printing more money. As such, even CNN is now admitting that the situation is dire, as in a few years, the debt will outside the national GDP.

On Thursday, the Congressional Budget Office estimated that for fiscal year 2020, which ended September 30, the US deficit hit $3.13 trillion — or 15.2% of GDP — thanks to the chasm between what the country spent ($6.55 trillion) and what it took in ($3.42 trillion) for the year.

As a share of the economy, the estimated 2020 deficit is more than triple what the annual deficit was in 2019. And it’s the highest it has been since just after World War II.

The reason for the huge year-over-year jump is simple: Starting this spring, the federal government spent more than $4 trillion to help stem the economic pain to workers and businesses caused by sudden and widespread business shutdowns. And most people agree more money will need to be spent until the White House manages to get the Covid-19 crisis under control.

The Treasury Department won’t put out final numbers for fiscal year 2020 until later this month. But if the CBO’s estimates are on the mark, the country’s total debt owed to investors — which is essentially the sum of annual deficits that have accrued over the years — will have outpaced the size of the economy, coming in at nearly 102% of GDP, according to calculations from the Committee for a Responsible Federal Budget.

“Debt is the size of the economy today, and soon it will be larger than any time in history,” CRFB president Maya MacGuineas said.

The problem with such high debt levels going forward is that they will increasingly constrain what the government can do to meet the country’s needs.

Spending is projected to continue rising and is far outpacing revenue. And interest payments alone on the debt — even if rates remain low — will consume an ever-growing share of tax dollars.

Given the risks of future disruptions, like a pandemic, a debt load that already is outpacing economic growth puts the country at greater risk of a fiscal crisis, which in turn would require sharp cuts to the services and benefits on which Americans rely.

“There is no set tipping point at which a fiscal crisis becomes likely or imminent, nor is there an identifiable point at which interest costs as a percentage of GDP become unsustainable,” CBO director Phillip Swagel said last month. “But as the debt grows, the risks become greater.” (source)

One may recall that the US economy requires people to spend money to keep it strong. But if people cannot spend because they are not earning enough, it can’t pay its debts, which means more debt to pay for obligations, and with it more currency printing to get money to people, which devalues the currency, and creates more job losses by way of higher prices and forced business closures, which means less spending.

There is no way out of this cycle until the debt itself is managed, and that is not going to happen until most likely a crisis is forced because it is at its ultimate center a political issue.

Putin Veritably Declares Support For The Democrat Party, Says There Are Many Common Values Between The Democrats And Communism
JPMorgan Extends Tens Of Billions In Loans In The Name Of ‘Fighting Racism’
Follow