You are here: Home › Why Was A Greek Orthodox Metropolitan In The US Suddenly Censured By The Patriarch? 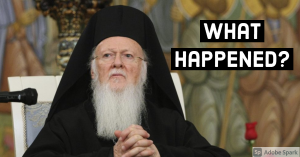 There is a well-known and problematic trend of persons attracted to both the same gender and small children entering into the priesthood and then using their positions to abuse children. However, this is not limited just to Catholics, for as I have pointed out, there is also the same problem in the Orthodox Churches, but the difference seems to be generally that the Catholic Church’s scandals have been more open in spite of attempts to hide them, while the Orthodox have been more closed and successful at repressing attempts to reveal such abuse in their ranks.

However, and thankfully, such abuse does come out, as it always should no matter who is in question because these things need to be exposed so they can be fixed. When they do come out, they often can come out in interesting ways.

Now one cannot say this is what happened, but according to the Greek Reporter, the Ecumenical Patriarch has suspended for the purpose of “penance” the faculties of the Metropolitan of Boston for “falling into canonical transgressions”.

Ecumenical Patriarch Bartholomew, the leader of all the Greek Orthodox faithful in the world, on Thursday placed the Metropolitan of Boston, Methodios, on “a penance of suspension” until Christmas for what he called “falling into canonical transgressions.”

The shocking news came in an announcement sent out on Thursday afternoon after the Holy and Sacred Synod had examined reports from Archbishop Elpidophoros, the head of all the Greek Orthodox in the Americas.

Methodios’ diocese includes the state of New Hampshire, where a controversy had flared recently regarding the giving of Communion using a communal spoon despite the Patriarchate stipulating that local churches should abide by local coronavirus rules.

The Attorney General had warned the New Hampshire church, St. Nicholas in Portsmouth, that it should stop using a communal chalice and spoon after three parishioners had tested positive for the coronavirus.

It has been disclosed since that time that none of the infected parishioners had in fact received Communion.

Today’s statement, issued by the Chief Secretariat of the Synod, also said that it had “placed into abeyance the force of the Charter of the Holy Archdiocese of America, with the objective of constituting a joint Committee of representatives of the Ecumenical Patriarchate and the Archdiocese for the composition of a new Charter.”

The Holy and Sacred Synod also stated that it had transferred His Eminence Metropolitan Evangelos of New Jersey to the Holy Metropolis of Sardes and appointed Archbishop Elpidophoros of America as Patriarchal Vicar in the vacant Eparchy of New Jersey. (source)

This is very interesting. One cannot say for sure what happened, but given the description that was provided, it is a story that needs to be closely watched, as one can only wonder what was the “transgression” that prompted this suspension for the purposes of “penance”.

Will Pennsylvania Become What Florida Was In Election 2000?
Russia Asks For Peace in The Arctic While She Proceeds To Militarize It
Follow