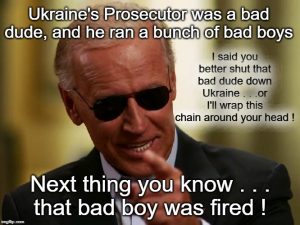 There is a long-recognized trend of “October surprises”, but this October seems to have surprise-after-surprise. In another turn of events, many news sources are reporting that Joe Biden’s son Hunter may have been caught in another interestin predicament by way of emails as introducing his father to key Ukrainian businessmen after claims of pressuring the government to fire a major prosecutor and thus suggesting major corruption in the deal.

Hunter Biden introduced his father, then-Vice President Joe Biden, to a top executive at a Ukrainian energy firm less than a year before the elder Biden pressured government officials in Ukraine into firing a prosecutor who was investigating the company, according to emails obtained by The Post.

The never-before-revealed meeting is mentioned in a message of appreciation that Vadym Pozharskyi, an adviser to the board of Burisma, allegedly sent Hunter Biden on April 17, 2015, about a year after Hunter joined the Burisma board at a reported salary of up to $50,000 a month.

“Dear Hunter, thank you for inviting me to DC and giving an opportunity to meet your father and spent [sic] some time together. It’s realty [sic] an honor and pleasure,” the email reads.

The blockbuster correspondence — which flies in the face of Joe Biden’s claim that he’s “never spoken to my son about his overseas business dealings” — is contained in a massive trove of data recovered from a laptop computer. (source)

Now, there will be many challenges to this report, as the claims are highly explosive. What exactly will come with this is something yet to be seen. After all, one does not want to assume anything.

However, what we can derive from this is that the trend of October Surprises is certainly repeating, and to that, one may expect more very interesting pieces of information and stories to come up as the election approaches. However, no matter what comes out, what ultimately does not matter is what is sensational, but what is true, and in the middle of a very tense conflict, sometimes that is a difficult task to accomplish.

Not Again: California Faces New Fire Threats
Fifty-Two Syrian Fighters Go To Azerbaijan To Fight And Kill Armenians For Turkey. The Armenians Then Ambush Them And Kill All Of Them
Follow