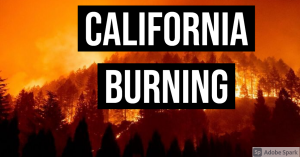 For years many sang the song “California Dreaming” with hopes of going to California for a better life, but right now it is the opposite, with people fleeing high taxes, oppressive regulations, and now, massive wildfires at historically unprecedented levels. The AP reports that amid the current wildfire issues, there is emerging even more new wildfire threats that have turned the idea of “California Dreaming” into “California burning”.

Fire crews from across the state were being deployed to Northern California, where hot, windy conditions Wednesday renewed the threat of fire in the region where massive blazes already have destroyed hundreds of homes and killed or injured dozens of people this year.

Most of the huge fires that erupted over the past eight weeks are now fully or significantly contained and skies once stained orange by heavy smoke are blue again. Containment means that firefighters have lines holding in a fire, though it doesn’t mean a fire has stopped burning.

But the gains made by thousands of firefighters assigned to the blazes that have scorched more than 4.1 million acres this year could be hampered if new fires ignite, said Daniel Berlant, assistant deputy director with the California Department of Forestry and Fire Protection, known as Cal Fire.

“If a new fire breaks out, that fire will be able to grow very quickly under these conditions,” Berlant said.

The National Weather Service issued a red-flag warning for extreme fire danger from 5 a.m. through Friday morning. With bone-dry humidity and wind gusts possibly hitting 55 mph, Pacific Gas & Electric, the largest utility in the nation, warned that it may cut power starting Wednesday evening to as many as 54,000 customers in 24 counties.

Preemptive electricity cuts are a strategy aimed at preventing fires from being started by power lines that have been damaged or knocked down amid high winds. PG&E equipment sparked several massive blazes that destroyed tens of thousands of homes and killed more than 100 people since 2017.

“We really view it as a last resort option,” said Mark Quinlan, the company’s incident commander.

The utility also has deployed generators and other measures to keep electricity flowing in some areas that might loose power during the outages, Quinlan said.

About 33,000 homes and businesses could begin losing power at 6 p.m., mainly in the Sierra Nevada foothills and northern San Francisco Bay Area, followed by 21,000 other customers two hours later in other portions of the Sierra and the Bay Area, along with portions of California’s central coast, PG&E said.

The figures for affected customers range from more than 11,300 in Butte County, 6,000 in Santa Cruz County and around 5,400 customers in Alameda County, according to the utility. (source)

For a time now I have identified a trend of severe weather conditions as a major ‘chokepoint’f for the US, since due to geopolitical reasons, the US main vulnerablily is natural issues.

It will be a trend to see if such weather and natural incidents increase, as while natural occurrences do take place, some are assisted by the hand of men with malicious intentions.