You are here: Home › The Sun Sets On The Golden Dawn As Its Leaders Get Lengthy Prison Sentences 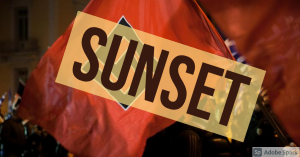 The Golden Dawn is an infamous Greek National Socialist group which Shoebat.com has written on and been one of the few outlets in English to describe her tied to satanism and a hatred of Christianity. While the group calls itself “Golden Dawn”, for now the sun has set on her as according to the UK Guardian her leaders are receiving lengthy prison sentences for various crimes.

The neo-Nazi leaders of Golden Dawn have each been sentenced to 13 years in prison by a court in Athens, at the end of a historic hearing.

The neo-fascist group was officially laid to rest as its disgraced former MPs were shown little mercy by a three-member panel of judges. Last week the court ruled that Golden Dawn lawmakers had operated a criminal organisation under the guise of being a democratically elected party.

A public prosecutor proposed lengthy prison terms for 57 defendants convicted of murder, assault, weapons possession and either running or participating in the criminal outfit, and on Wednesday a total of more than 500 years behind bars was handed down by the tribunal.

Golden Dawn’s founder, Nikolaos Michaloliakos, 62, is facing 13 and a half years in prison, the price for not only masterminding the organisation’s criminal activities as its self-appointed führer but turning what was once a fringe Nazi movement into a political force whose modus operandi was the eradication of enemies by hit squads.
His extremist views were formed during Greece’s 1967-74 Colonels’ regime. He was handed an extra six-month jail term for illegal arms possession.

Ioannis Lagos, an MEP and one-time close confidante of Michaloliakos, received a prison term of 13 years and eight months, requiring Greek judicial authorities to request that his political immunity is lifted.

From its inception in the early 1980s through to 2012 when, riding a wave of economic anger and despair, it began its seven-year stint in parliament, the far right group targeted leftists, anti-nationalist “traitors”, communist trade unionists, members of the LGBTQ community, migrants and refugees.

The admission of a senior party operative, Giorgos Roupakias, that he had fatally stabbed Pavlos Fyssas, a popular anti-fascist hip-hop artist, triggered the party’s fall with the then conservative-led government, finally setting the wheels of Greek justice in motion.

Roupakias was the only gang member to be given a life sentence on Wednesday. He had claimed feelings of contrition for the murder of the 34-year-old Fyssas. The slain singer’s father, attending the hearing with Fyssas’s mother, Magda, expressed disappointment at the other sentences, telling reporters: “They are too light. I am not satisfied. I had hoped they would get 20 years.”

Golden Dawn MPs found guilty of sowing terror on the streets of suburbs far and wide, coordinating black-clad militias in their constituencies, were handed sentences ranging from five to seven years.
The deputies included Michaloliakos’s wife, Eleni Zaroulia, who in one address before parliament infamously described immigrants as being “subhuman”.

Ilias Kasidiaris, who has broken away to form his own far-right party since Golden Dawn’s failure to be elected to the 300-seat house last year, was handed a 13-and-a-half-year prison term as a top-tier member of the inner circle around Michaloliakos.

The former commando, who gained notoriety by slapping a communist female MP on TV, was caught on camera openly bragging that parliamentary representation had allowed the group to “exploit certain privileges like having a licence to carry a weapon”.

The sentences seal the fate of a political force that has quickly dissolved amid defections and factional infighting since its ejection from parliament.

But the five-and-a-half-year trial has illuminated the extraordinary leniency shown towards the Nazi sympathisers by the Greek state.

In a country that suffered so badly at the hands of occupying Nazi troops, many accept it has taken far too long to acknowledge crimes that were all too apparent long before Greece’s political class took action.

A police report leaked last week said as many as 16 far-right groups were vying to fill the vacuum left by Golden Dawn. (source)

The death of the Golden Dawn, however, does not mean an end to the trend of nationalism in Greece. From the viewpoint of history, they are but a stepping stone to a process that has been started in Europe and is gong to continue to grow until it likely explodes into something much more violent and terrible than even what the Golden Dawn spoke of.