You are here: Home › Things Just Got Real As Azerbaijan Accuses Armenia Of Planning To Attack Her Pipelines 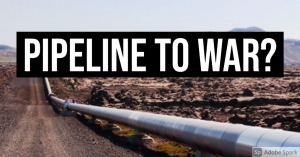 The current Azeri-Armenian conflict over the region of Nagorno-Karabakh already has caused many war casualites. However, as with many wars, there are certain things that one does not do. Armenia alluded that they might attack Azerbaijan’s oil pipelines that lead into Turkey and which are the heart of its economy. Azerbaijan responded that if Armenia did such a thing, they would attack the Armenian nuclear plant at Matsamor. So far, both sides have respected this much of each other.

But in the term of American popular slang, “things just got real” as Azerbaijan is now accusing Armenia of plotting to attack her oil lines as Zero Hedge reports.

The series of conflicts in the South Caucasus between Armenia and Azerbaijan is threatening to trigger regional powers. This will result in destabilizing the area that serves as an important energy corridor for global markets around the globe. Reports indicate that Armenia is planning to attack the oil gas pipelines in the Azerbaijan region.

“Armenia is trying to attack and take control of our pipelines,” said the Azeri President, Ilham Aliyev in an interview with Haberturk, a Turkish broadcaster. “If Armenia tries to take control of the pipelines there, I can say that the outcome will be severe for them,” he warned.

Armenia responded by denying targeting Azeri pipelines, which transport oil and gas to the global markets. However, there are increasing concerns regarding the conflict after the failure of a four-day-old ceasefire to end the worst clash in decades over the tiny territory situated in the South Caucasus.

The violence spurred on till Wednesday. The continuous clashes have raised fears that big regional powers, Turkey and Russia could be sucked into the conflict which will lead to further bloodshed. (source)

This really is not about Azerbaijan or Armenia. This is about EU/Germany/NATO/Russia/Turkey/US fighting for power with multiple levels of interlocking and conflicting interests at the same time.

However, given the potential consequences of the situation, it will be interesting to see how both Azerbaijan and Armenia respond.