You are here: Home › Armenia And Azerbaijan Agree To A Second Round Of Talks 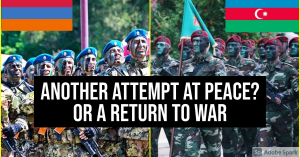 While the US talks about elections and argues over who will ascend the stairs of power, Armenia and Azerbaijan are still shooting at and killing each other in a horrible war with potentially major geopolitical implications for the Middle East. Given the trends toward war, the revival of the USSR at the same time with its own internal dissolution, and the potential for Turkey to continue to grow into a revived version of her Ottoman past, what happens in this war will affect many. Russia attempted to broker an initial peace but that agreement collapsed, and now for a second time according to Pravda is attempting to hold more talks, and if successful, would be the third attempt to halt the violence.

Armenian Prime Minister Nikol Pashinyan said he was ready to meet with Azerbaijani President Ilham Aliyev in Moscow to discuss the settlement of the situation in Nagorno-Karabakh.

It should be reminded that earlier the foreign ministers of Azerbaijan and Armenia had already met in the Russian capital, who agreed to introduce a truce from October 10. The ceasefire has been repeatedly violated and is not being respected.

The Azerbaijani leader expressed his readiness to come to Moscow to meet with Pashinyan.

“In this case, I did not receive such an invitation, so this is not a question for me. Russian President Vladimir Putin personally and before him Dmitry Medvedev held trilateral meetings between the leaders of Armenia and Azerbaijan many times. But after the power in Armenia passed into the hands of a conditional one.” Soros, “such contacts have ceased,” Aliyev said.

The second truce came into force on October 18, however, and it was soon broken. The parties traditionally accused each other of violating the ceasefire. (source)

This is a very serious matter. It may come to a point where, as I noted before, the UN itself may intervene. No matter what happens, the very likely winner will be Azerbaijan, and with that, Turkey, which is why Russia wants to broker peace first, since it would give her the advantage to shape a peace most amenable to her interests given the very difficult situation that exists in that region.

What will be to watch is the response of the world community, as well as the regional one from Turkey, since she already pledged to support the Azeri side, and rumors are coming that she is sending fighters into Azerbaijan secretly and having them cross into Central Asia.