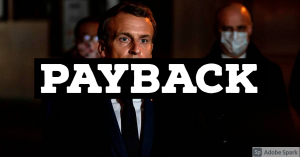 Following the vicious attack by the Chechen Aboulakh Anzorov, there has been a public uproar across France, with public anger as well as the French government now exerting pressure on Islamic organizations according to Index.HR.

POLICE began a search in France today for “dozens” of individuals from Islamist circles after a Chechen terrorist beheaded a professor against whom a death sentence had been issued (fatwa), Interior Minister Gerald Darmanin announced.

“They have issued a fatwa against the professor,” Darmanin told Radio Europe 1.

“Enemies of the Republic will not have a minute’s respite”
More than 80 investigations have been opened due to the spread of hatred through social networks, the minister said.

“The enemies of the Republic will not have a minute’s respite,” Darmanin announced, saying they were “combing” the associations.

Civil services will be touring 51 associations throughout the week, and some of them, such as the Community Against Islamophobia in France (CCIF), will be disbanded, Darmanin said.

The CCIF is “obviously involved,” he said of the alliance, which “receives financial assistance from the state, tax breaks.”

Darmanin also mentioned the non-governmental organization Baraka City, which was founded by Muslims of Salafist profile, and whose president Driss Yemmou is under surveillance as part of the investigation of abuse through social networks.

When he mentioned the fatwa against the professor, the minister meant the father of a student at the Bois d’Aulne school in Conflans-Saint-Honorine near Paris and the Islamist activist Abdelhakim Sefrioui.

The two men were arrested as part of an investigation following a murder committed by an eighteen-year-old Chechen who was then killed by police.

History teacher Samul Paty was beheaded shortly after a teacher showed students caricatures of the Prophet Muhammad on Friday, and they were the reason for the murder of journalist and cartoonist of the satirical weekly Charlie Hebdo in 2015.

The brutal murder was also condemned by Muslim leaders. This act of violence was perceived by many public figures as an attack on the essence of French statehood and its values ​​- secularism, freedom of religion and freedom of expression. (source)

What were the circumstances behind this attack, other than Anzorov’s clear irritation towards his Islamic sensibilities? Are we looking at something greater here? One is not sure and cannot directly say based on the information presented. However, at the very least, we can say that what is happening is being exploited for political gain, and considering the rise of nationalism, the continued anti-Islamic and anti-migrant sentiments, the militarization of both France and Germany, and the fracturing of the European Union, it will be important to see how this affects the short and long-term trends for the perception of Islam in France and the subsequent nationalist movements.

History Teacher In France Shows His Students Drawings Of The Prophet Muhammad. An Islamic Terrorist Ambushes Him Outside Of The School And Chops His Head Off. Police Officers Arrive And Eventually Kill The Terrorist
Armenia And Azerbaijan Agree To A Second Round Of Talks
Follow