You are here: Home › Now Garbage Bags Of Ballots Are Being Found In Washington State 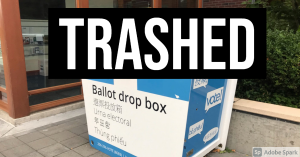 With the chaos already beginning, Oregon’s her sister state to the north of Washington there have been found trash bags by the side of the road containing mail-in ballots according to KOMO news Washington.

Sammamish Police are investigating potential mail theft after two garbage bags of mail, which included ballots, were found on the side of the road and several unopened ballots were found in incorrect mail boxes.

The City of Sammamish says USPS delivered about 90% of ballots to Sammamish residents on Thursday. Mail carriers were out delivering Amazon packages early Friday morning when they found two garbage bags of mail on the side of the road. There were several unopened ballots inside the bags of mail.

The City of Sammamish says Sammamish Police were also notified by the postmaster of reports of numerous ballots being stolen and placed in other mailboxes.

Sammamish Police say they will attempt to deliver the recovered ballots to residents. Those ballots that are not delivered will be returned to the post office and will get delivered to the residents’ mailbox. (source)

While it is yet to be seen, there is a possibility that the 2020 election may go down as the most corrupt election in history, given how it seems that the ballot issues we are seeing already in Oregon and Washington may extend to other states.

It does not matter what one attributes the issues to. It could be ‘foreign actors’, it could be domestic individual, it could be trolls, it could be groups such as those tied to Bannon-type persons. It really doesn’t matter what the issue is in question, since the fundamental result could be corruption that would lead to some form of election chaos. As I have warned, the trends reflect patterns seen in the year 2000, but except with just Florida, this could be multiple states.

It is going to be a very interesting Election Day 2020, and one to watch very carefully.

Shoebat.com Prediction Starts To Come True As Major Commercial Real Estate Crisis Looms
History Teacher In France Shows His Students Drawings Of The Prophet Muhammad. An Islamic Terrorist Ambushes Him Outside Of The School And Chops His Head Off. Police Officers Arrive And Eventually Kill The Terrorist
Follow