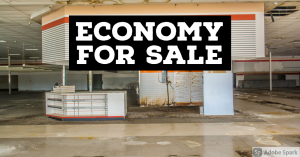 One of the concerns that I have repeatedly addressed at Shoebat.com as a trend for the future is a looming ‘real estate crisis’ right now where commercial real estate, most of which is leveraged heavily, cannot service said debts because businesses, which are equally leveraged, cannot service their own mentioned debts because the consumer is stuck in a position between not earning enough to pay his bills and if not, is caught in his own debts.

This is a kind of ‘black hole’ of debts that has constinued to spiral out of control to the point where it is consuming further members along the economic chain. In the case of commercial real estate, it is a combination of property devaluation and a lack of desire by a company to acquire said real estate that creates a serious problem for banks, who are forced to hold such properties in the event of a foreclosure. It ultimately does not turn into a profit, but an expense for them.

Politico reports this is happening right now, as at least fifteen trillion dollars in the commercial real estate market is at risk of jeopardizing the banking system itself.

Commercial real estate is in trouble, and turbulence in the $15 trillion market is threatening to bleed over into the broader financial system just as the U.S. struggles to emerge from a recession.

The longer the pandemic paralyzes hotels, retailers and office buildings, the more difficult it is for property owners to meet their mortgage payments — raising the specter of widespread downgrades, defaults and eventual foreclosures. As companies like J.C. Penney, Neiman Marcus and Pier 1 file for bankruptcy, retail properties are losing major tenants with no clear plan to replace them, while hotels are running below 50 percent occupancy.

“Sometimes people forget the depth and breadth of what commercial real estate is,” said Mike Flood, senior vice president of commercial and multifamily policy at the Mortgage Bankers Association. “What’s at risk here is both the ability for people to stay in their apartments and the ability for people to go to their jobs. So unless there’s a stimulus, there’s a lot less to go back to once we get back to normal times.”

A major problem is no one knows how long the drop in commercial real estate will last. Business travel isn’t expected to pick back up for at least a year, so hotels are being hammered. And while office buildings have not yet felt the brunt of the downturn — offices tend to have long leases — that will change as many companies rethink the way they’ll operate as work from home becomes the norm.

The loss of paying tenants could touch off a wave of property write-downs and eventual foreclosures on everything from shopping centers to apartment buildings. But it’s not just a pocket of wealthy investors who will get hurt by widespread write-downs. Eighty-seven percent of public pension funds and 73 percent of private pension funds hold real estate investments.

Borrowers seeking loan relief or considering refinancing are also running into trouble, as the uncertainty caused by the virus has left them with no clear projection of future revenue streams for their buildings.
“Every lender is trying to help regardless of form of finance, but sooner or later the borrower needs customers,” Flood said.

The damage is already showing up in the securities market, where mortgages are packaged into bonds sold to investors, who are then repaid by payments on the mortgage.

One in 5 loans bundled into commercial mortgage-backed securities are on special servicing watchlists, where loan servicers — the companies that collect mortgage payments and advance them to investors — flag potential obstacles to future payments, like a major tenant moving out.

Because the crisis has hit some places and industries much harder than others, it’s difficult to get a clear, big picture of the market’s troubles — one reason lobbyists have struggled to convey the urgency to policymakers. Some assets have been wiped out, while others are thriving.

Hotels and retail, which together make up 40 percent of the commercial mortgage-backed securities market, have been hit the hardest. Months after lockdowns lifted, 1 out of every 2 hotel rooms remains unoccupied. Urban hotels, which have some of the largest operating costs, are faring the worst, with just 38 percent occupancy rates.

And retail, which was already struggling before Covid struck thanks to the rise of e-commerce, has seen its decline hasten. It’s not just small strip malls, either: The owner of the $1.9 billion Mall of America entered into an agreement with its special servicer in August to avoid foreclosure.

Apartment buildings, on the other hand, have performed well — so far. Industry analysts are anxiously watching for signs of additional tenants missing rent now that the initial spurt of economic relief included in the $2 trillion CARES Act Congress passed in March is sputtering out.

Apartment property owners are also hemmed in by a nationwide ban on evictions for nonpayment of rent put in place by the Centers for Disease Control and Prevention last month. The order included no funding for rental assistance — effectively requiring landlords to subsidize struggling tenants’ housing until it expires Dec. 31.

“The worst-case scenario is you take the shining asset in all of commercial real estate and potentially create a liquidity crisis, and quite frankly, a situation where people are put out on the street,” Flood said. The unfunded eviction ban, he said, “transfers the risk to the borrower and the lender.”

In the long-term, the source of funding doesn’t make much difference — eventually, a bank will have to write down a property that doesn’t recover. And industry analysts aren’t sure which properties will.

“The main question is likely around structural economic changes or shifts in shopping and living behavior,” Bright said.

“I think everyone is trying to understand what a post-Covid world means for commercial real estate,” he said. “Hopefully, people want to travel and gather together again soon, but we don’t yet quite know.” (source)