You are here: Home › Will Erdogan Look To Fill A Power Vacuum? 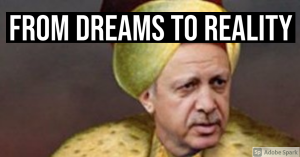 With a tumultuous US election, at least as how it appears from the outside to many, world leaders are taking notice- some with concern, and others with delight. According to the Washington Examiner, one of those in the latter category is noted as being President Erdogan, sparking fears among some that a ‘power vacuum’ created by the US may lead to cementing his position in the Middle East.

American adversaries and rogue nations around the world sense a “power vacuum” in the United States in the final days of the 2020 presidential elections that raises the risk of foreign policy crises, allied sources fear.

“In our region, we feel that America doesn’t have time, wish, or resources or political will to devote attention, and we also feel some kind of vacuum,” a Baltic official said. “We feel the absence of America from our region, and this absence has some negative connotations.”

The proliferation of that sentiment has left allies feeling more vulnerable to threats from Russia and China over the coming weeks. It may account even for the hardening of disputes within the U.S. alliance network, such as the recent surge in aggressive foreign policy moves by Turkish President Recep Tayyip Erdogan.

“Erdogan is becoming more prone to risk-taking,” Greek lawmaker Dimitrios Kairidis told the Washington Examiner. “He feels a bit more emboldened, the closer we go to the elections. In his mind now, he sees a power vacuum in Washington he wants to exploit.”

Pompeo and Defense Secretary Mark Esper have maintained busy travel schedules in recent weeks, sometimes in the face of domestic critics who suggest that “the concern about continuity of government” following Trump’s recent coronavirus diagnosis should have curtailed their itineraries. Pompeo traveled through the eastern Mediterranean last month, in an implicit rebuke of Erdogan’s truculence. He returned to the U.S. for an event in Florida and then departed immediately for Tokyo to meet with leaders from Japan, Australia, and India.

Esper, that same week, visited four North African nations and Kuwait. And Deputy Secretary of State Steve Biegun traveled to Russia and Eastern Europe two months ago, in a diplomatic tour designed in part to deter the Kremlin from launching any military intervention. White House national security adviser Robert O’Brien suggested that U.S. officials are avoiding more overt displays of support for the protesters against Belarusian autocrat Alexander Lukashenko in order to avoid triggering a worse crisis.

“We don’t want to come in and be accused of fomenting another color revolution that would give license to the Russians or Lukashenko or someone to crack down on these protesters,” O’Brien said during an Aspen Institute event Friday. “The problem with that we have with the Russians is there’s not a lot left to sanction.”

Kairidis offered his assessment of Erdogan amid a standoff between Athens and Ankara, exacerbated by the Turkish leader’s reported use of Russian S-400 anti-aircraft missile systems. His apparent test-firing of the advanced Russian weaponry raises the likelihood that the U.S. will impose sanctions required by a federal law known as CAATSA that is designed to drive customers away from Russia’s defense industry —and it may reflect his expectation that Trump is going to lose to Joe Biden in November, another Erdogan observer surmised

“Trump is more likely to pick lighter sanctions, compared to Biden,” said former Turkish lawmaker Aykan Erdemir, an Erdogan critic at the Foundation for Defense of Democracies. “Maybe from Erdogan’s perspective, it’s better to be done with CAATSA sanctions now than later.” (source)

Now I should be clear in that the chance which Trump wins is very high. We see this already as in spite of the constant talk that would incline one to favor Biden, Trump carries the advantange, and this is becoming more obvious in states such as Florida and Pennsylvania as more ballots come it, tales of corruption at the ballot boxes around the nation emerge from the shadows, and just more people vote, for love or hate Trump, the demographics still work to his favor.

But the interesting point here is the concept of, as stated in scientific literature, that “nature abhors a vacuum”, which is that a vacuum always tends to be filled with something else. Even if one was to suck the air out of a plastic sandwich bag, the bag would fold so that the other parts of the bag itself attempt to occupy the space that was once occupied by air.

This theory also applies to power. In the case of Turkey, of which the trend for her has been a rising long-term revival of the Ottoman Empire and her desire to assert herself around the world, Turkey is making her intentions known to the world.

It should be pointed out that Trump has admitted his like of Erdogan, and the US has always had a close relationship with Turkey ever since the nineteenth century, when she supported the Ottoman Empire and after World War II, helped Turkey rebuild into one of the strongest militaries in the world, and to possess the second largest army in Europe save for Russia as a part of stay-behind operations directed against the then USSR.

Turkey is not going to run away any time soon. However, if the US was to pull out of the Middle East in a serious way, she would immediately find her vacancies filled by Turkey, and in the case of the House of Saud, their family members filled with Turkish Khawaazik (plural of Khazouk), for it is likely that the majority of the Muslim would would cheer on the “Turkish March” across southwestern Asia. Likewise, even the perception of ‘instability’ (feigned or real) may result in Erdogan feeling emboldened to assert himself more.

For all of the criticism levied at the US, she is arguably a strong stabilizing force in the region, and without her the power vacuums created would be replaced by another actor, namely Turkey, and not in a kind way at all.

Erdogan has made clear that he wants to, like Trump with MAGA, do his version of MTOA- Make Turkey Ottoman Again -and while most likely nothing right now is going to happen, the signs are clear- he is watching, he is waiting to move, and any chance that opens up to him he will take for his benefit.