You are here: Home › US Pledges To Help India In Light Of China Tensions, Give Military Intel To India 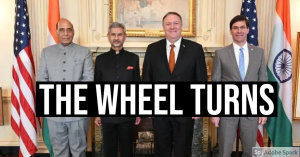 The US-Indian alliance is a trend that I have identified at Shoebat.com as being a major matter to watch because it is part of the anti-China stance of the US, which has also been building relations with China’s other neighbors in what appears to be an ‘encirclement’ strategy, leaving China to fend for herself with no real allies (Pakistan may be an ally, but she will be of no use to her in a real conflict, as Pakistan will have to fight for her survival against Iran, India, and possibly Turkey). This is also a reason why Christian persecution is growing in India yet the US government will not criticize it there but will in China, for it is sadly used as a tool of political leverage, as criticizing the Hindu nationalist persecution of Christians will hurt US-India relations, but doing so against China only benefits the US using the plight of the Christians as a vehicle for national ends.

In another development in the US-India relationship, in light of the Sino-Hindu tensions in Ladakh, Indian NDTV news reports that the US has agreed to share sensitive military information with India.

India will gain access to precision data and topographical images – on a real time basis – from United States military satellites under an agreement to be signed during the ongoing visit of Secretary of State Mike Pompeo and Defence Secretary Mark Esper.

The agreement to share this data – BECA (Basic Exchange and Cooperation Agreement) – is the third and final “foundational” understanding the US has with close international partners. The two countries have already signed agreements to exchange military logistics and enable secure communications.

In a statement released on Monday the government said Defence Minister Rajnath Singh and his American counterpart, Mr Esper, expressed satisfaction that BECA would be signed during this visit and also at the close engagements between the armed forces of the two countries.

Mr Esper also welcomed Australia’s participation in next month’s Malabar exercise – a series of annual drills that began in 1992 to reinforce cooperation between Indian and American naval forces.

India, with the US, Japan and Australia will hold the high-level Malabar naval exercise next month. Australia is returning to these exercises for the first time since 2007 when its participation drew criticism from China (source)

These events, which as noted above also include Australia, are part of the larger trend towards global war and conflict, which will be in Europe and Asia just like in the Second World War.

Likewise, if one is a Christian, expect to see more Christians mistreated in India and silence from the US. If you are a Christian in India, you need to consider perhaps leaving India, or making preparations, since the US will prioritize her military relationship with India over the good will of the Christians, and they could find themselves in a similar situation to what the Jews did in Germany under the Reich after World War II began.

The trends speak to the times- be prepared lest one finds oneself caught in the approaching chaos.