You are here: Home › Police And Authorities Warn Of Civil Unrest In Seattle Leading Up To Election Day 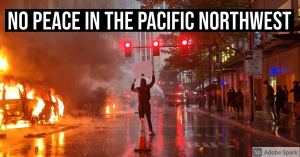 With election day just around the proverbial corner, there is continual talk of civil unrest at polling places around the country. One place of interest to us at Shoebat.com in particular is the Pacific Northwest region, as we have identified this as a place where, similar to what Bohemia and Moravia are in Europe, an area where extremes cross and violence could erupt for a strategic purpose in the hands of a skilled political manipulator.

According to the Seattle Times, it is of interest that a significant number of local, state, and federal law enforcement units have been mobilized in the even of unrest.

As tension builds toward Election Day, law enforcement officials in Washington and elsewhere are preparing for the prospect that this year’s long, hot summer of unrest won’t end on Nov. 3, regardless of who wins the presidency.

If anything, officials worry that pressure will only build in the coming weeks, faced with the possibility of a contested election, spiking gun sales and ongoing civil unrest over institutional racism and police violence, all driven by a tsunami of social media misinformation and conspiracies from the right and left, not to mention from foreign adversaries.

“I can say that we have no specific, credible threats at this time,” said Joshua Murphy, the assistant special agent in charge of the Seattle office of the FBI, where he oversees counterintelligence. Before that, he ran the Joint Terrorism Task Force.

Even so, federal, state and local officials have participated in “tabletop” exercises outlining possible scenarios for post-election violence and mayhem. At least 300 National Guard soldiers, recently deployed overseas, are being trained to handle civil unrest. They will be placed on alert with hundreds of other Guard members who have already been trained for handling such disturbances. Police leaders in Seattle, which has hosted some of the country’s largest racial justice protests, have canceled time off for officers.

“Given the atmospherics and the civil unrest this summer since the May riots, we’ve focused and increased our resources,” said Murphy. Agents anticipate more unrest like that seen in the aftermath of the mass protests that sprang up in the wake of the May 25 video-recorded death of George Floyd while handcuffed and restrained by Minneapolis police.

On one of the most chaotic days, thousands of mostly peaceful protesters gathered in downtown Seattle on May 30 in support of Black Lives Matter, but some in the crowd looted stores and vandalized buildings. Federal prosecutors have charged a handful of individuals for burning police cars and gun-related charges, including stealing police firearms from patrol cars (source)

Whether or not a trend to violence happens here for this election, this area will be an important place to monitor for the future, considering that assuming a Trump 2020 victory (which seems to be the greater possibility at this point), this area will continue to be potentially at increased risk of future conflict building up to the 20204 election, which as I have noted, is going to be the real election that matters since that is where major change in the Democrat party will happen in a way not seen since the “Obamamania” of 2008.

Will Germany Expel The Thai King?
US Pledges To Help India In Light Of China Tensions, Give Military Intel To India
Follow