You are here: Home › US Signs Declaration That “There Is No International Right To Abortion” 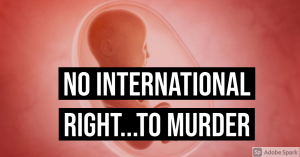 Often times when one hears about the US and supporting certain policies, the trends tend to be negative, questionable in nature, or even depressing. However, there are times when more positive trends come out. Such happened recently, where it has been reported by the Christian Post that the US signed a declaration with thirty-one other nations saying that “there is no international right to abortion.”

The United States, along with 31 other countries, signed on Thursday a document declaring that “there is no international right to abortion.”

The two-page Geneva Consensus Declaration on Protecting Women’s Health and Strengthening the Family was cosponsored by the U.S., Brazil, Egypt, Hungary, Indonesia and Uganda. Because of the coronavirus pandemic, the signing of the document took place at a virtual multinational ceremony instead of at the World Health Assembly in Geneva, Switzerland, as originally scheduled.

While the Geneva Consensus Declaration touched upon several issues of importance to the international community, including universal healthcare as well as women’s rights and equality, the signatories made their opposition to abortion clear.

The Geneva Consensus Declaration reaffirms “the inherent ‘dignity and worth of the human person,’ that ‘every human being has the inherent right to life,’ and the commitment ‘to enable women to go safely through pregnancy and childbirth and provide couples with the best chance of having a healthy infant.’” The document frequently references the Universal Declaration of Human Rights, crafted by the United Nations General Assembly in 1948.

It also emphasizes that “‘in no case should abortion be promoted as a method of family planning’ and that ‘any measures or changes related to abortion within the health system can only be determined at the national or local level according to the national legislative process.” The consensus stresses that “the child … needs special safeguards and care … before as well as after birth.”

“Under President Trump’s leadership, the United States has defended the dignity of human life everywhere and always. He’s done it like no other president in history,” Secretary of State Mike Pompeo said at remarks delivered alongside U.S. Secretary of Health and Human Services Alex Azar shortly after the signing ceremony. (source)