You are here: Home › Poll: Thirty Percent Of Women Under Twenty-Five Identify As Sodomites 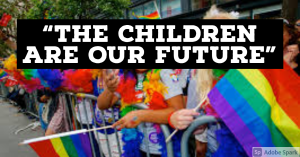 In September 2018, Shoebat.com reported a trend that the Zoomers are the most sodomitically inclined generation in US history, with 25% identifying with the bloc. Now two years later, a new poll reaffirms this trend with reports that it is not just twenty-five, but thirty percent of Zoomer women who identify as sodomites.

A shocking new private poll shared by one of the country’s leading data scientists claims that 30% of American women under 25 identify as homosexual, bisexual, or transgender.

Before looking into the reasons for these numbers, Eric Levitz, in a New York Magazine article about the gender gap between Trump and Biden supporters, calls attention to the continuing rise of “singledom” — a preference for non-married life — among young women in the United States:

Neither the societal shift away from traditional gender roles nor the downstream cultural consequences of that shift are anywhere near complete. As Rebecca Traister has incisively argued, the growing prevalence of singledom among America’s rising generation of women is one of the most potent forces in contemporary politics. In 2009, for the first time in history, there were more unmarried women in the United States than married ones.

A large part of the trend away from marriage is attributable to young women rejecting sexual complementarity and identifying as lesbian, bisexual or a member of the opposite sex, Levitz explains:

And today, young women in the U.S. aren’t just unprecedentedly single; they also appear to be unprecedentedly uninterested in heterosexuality: According to private polling shared with Intelligencer by Democratic data scientist David Shor, roughly 30 percent of American women under 25 identify as LGBT; for women over 60, that figure is less than 5 percent. (source)

Because all activity from sodom is non-genitive, a society with a large bloc of sodomites does not have a future. This is simply from the biological perspective, to say the very least, let alone the moral complications that it causes with even more serious consequences.

When man cannot solve his own problems because he simply refuses to, the only end result of this is always conflict, and if the conflict is magnified over millions, then it is not just a personal problem, but turns into a war.

Greece Begs Germany To Stop Selling Arms To Turkey. The Germans Say “Nein”
The Fed Really Is Running Out Of Ways To Help The Economy
Follow