You are here: Home › Trump, Putin And Macron Call For Peace Between Armenia And Azerbaijan, But Erdogan Rejects Calls For Peace And Wants The Fighting To Continue

By Shoebat on October 1, 2020 in Featured, General, Highlight 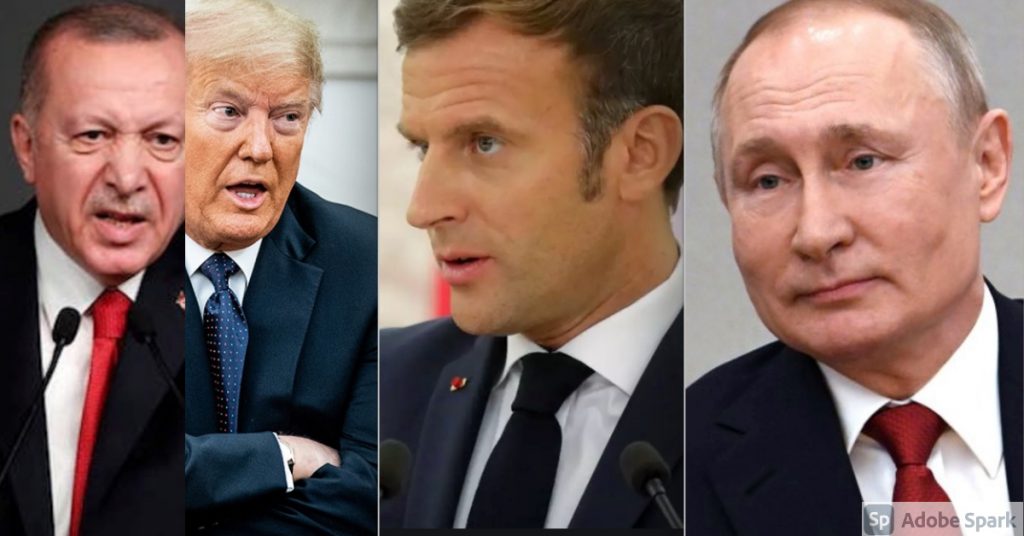 President Trump, the President of France, Emmanuel Macron, And the President of Russia, Vladimir Putin, have exhorted both the Armenians and Azerbaijanis to cease their fighting which has, so far, led to the deaths of about hundred people and hundreds more getting wounded. But, both Armenia and Azerbaijan refuse to end their warring and Turkey has also objected to the calls for peace. In their joint statement, Trump, Putin and Macron stated:

Erdogan has rejected such an exhortation to peace, arguing that the fighting will only stop if Armenia ceases its “occupation” within Azerbaijan. He was referring to Nagorno-Karabakh, which is the region that Armenia and Azerbaijan are fighting over. While Nagorno-Karabakh is internationally recognized as being a part of Azerbaijan, it is mainly inhabited by Armenians who live under the de facto Republic of Artsakh which, while not internationally recognized, is governing the region to the ire of Azerbaijan and its allies. “Given that the USA, Russia and France have neglected this problem for nearly 30 years, it is unacceptable that they are involved in a search for a ceasefire,” Erdogan said.

The fighting in the South Caucasus is convenient for Turkey; for as long as the fighting continues Ankara has an excuse to expand its influence into the Caucasus, both governmentally and militarily speaking (Turkey has been parking its F16s in Azerbaijan and conducting joint military training with the Azeris to scare the Armenians); this military influence is reflected by reports coming out of Armenia about how a Turkish F16 destroyed an Armenian SU-25, the photographs of the remnants of which have been recently published by Armenian media.

As long as the conflict continues, Turkey can pursue its efforts of entrenching its geopolitical influence in Azerbaijan, using the country as a proxy against Armenia, which is a proxy for the Russians. The Russians, on the other hand, are backing the Armenians against the Turkish ally, Azerbaijan. So, both superpowers — Turkey and Russia — have interests in establishing political leverage in the Caucasus. Russia has been pushing for peace talks between Armenia and Azerbaijan which it would mediate. As the Moscow Times reports: “Russia said Friday it is prepared to mediate peace talks between ex-Soviet rivals Armenia and Azerbaijan after fighting escalated along their shared border.”

Kremlin spokesman Dmitry Peskov stated that Putin and Russia’s Security Council: “emphasized an urgent need for the parties to adhere to a ceasefire, and voiced a readiness to mediate efforts”. According to Russia’s Foreign Ministry, Russian Foreign Minister Sergei Lavrov and his Turkish counterpart Mevlut Cavusoglu agreed in a phone call on the need to create a “favorable atmosphere” to improve working relations between Armenia and Azerbaijan. “The ministers have declared in favour of the adoption of measures to create a favourable atmosphere that will facilitate the effectiveness of the dialogue on the implementation of agreements in support of the Syrian settlement and other issues on the agenda of Russian-Turkish relations,” the ministry said. However, both agreed that peace talks will not be an easy task. Both Russia and Turkey have historically held control over the Caucasus, and it makes sense that both countries are involved in the conflict, for it is a chaos that can be easily take advantage of to the advancement of the proxies’ rulers. The wicked nation of Turkey still denies that it committed a genocide against the Armenians in the first half of the 20th century. Yet, it is still at war against Armenia. Imagine if Turkey ever invades Armenia; the rivers of blood will cry for justice.

The Armenia Azerbaijan Conflict Is A Proxy War Between Turkey And Russia. Turkey Is Using The War To Revive The Ottoman Empire
European News Magazine Reports: “Turkish Air Force F-16s Were Deployed Against Armenia And Shot Down An Armenian Military Aircraft”
Follow