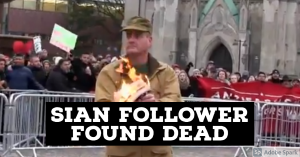 Shoebat.com has been known since her inception as opposing the evils of Islam, but not to the support of persons or ideas that promote other major evils such as racialism and eugenics. This has been our main criticism of the counter-jihad movement, as in the name of ‘fighting Islam’ she has alled with people promoting dangerous, despicable, violent, racialist, and ultimately eugenic ideas.

In an interesting story from the Danish Berlingske, Lars Thorsen, who is the leader of SIAN, the anti-Islam group for Norway tied to Pamela Geller so much that he even authored pieces for her blog and famously burned the Koran in public, announced that a SIAN follower was found dead under suspicious circumstances.

Norwegian police have launched a murder investigation after a 40-year-old man was found dead in his apartment in Kristiansand on Saturday.

It informs a spokesman for the police on Saturday at a press conference.

Several Norwegian media write that the man who was found dead on Saturday is a prominent member of the Islamophobic group Stop the Islamization of Norway (Sian).

The leader of Sian, Lars Thorsen, confirms to VG that he has been informed that one of the group’s members was found dead on Saturday afternoon.

Lars Thorsen knows the 40-year-old man through their joint involvement in the group.

“He has been pursuing political activism for many years – much longer than me. And he has clearly marked himself as a champion of Norway and Norwegian values, “says Lars Thorsen to VG.

Norwegian police have not confirmed the information and did not disclose the identity of the deceased at Saturday’s short press conference.

However, the police confirm that it is a 40-year-old man. And the circumstances surrounding the death have led to the death being described as “suspicious”.

Therefore, the police have chosen to initiate a homicide investigation.

“The police are still in the initial phase of this investigation,” says police attorney Henrik Bjugan Hegdahl.

“We work from several hypotheses. One of the hypotheses is that this person has been subjected to a serious act, ”he adds.

The police attorney did not want to comment on Norwegian media information that the deceased should be a member of Sian.

He adds that police have not yet charged or arrested any suspects in the case. (source)

This is a very interesting case because of the overlap it has with SIOE/A (Stop the Islamization of Europe/America) and their sister national groups across Europe and the American ‘counter-jihad’ movement. Given the trend of connecting the anti-Islam movement to nationalism and the rise of eugenics and militarism, it will be interesting to see if and what this case may bring up to public knowledge.