You are here: Home › Protests Erupt In Mongolia Over Treatment Of Ethnic Mongolians In China 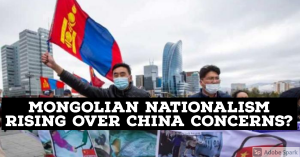 In many parts of the world, the use of language is intimately tied to political ambitions. It is why in Russia, there is such an emphasis on the Russian language and a very carefully balanced position on regional cultures, especially in the Far East. The same is also for China, and is the reason why the Chinese government has been so aggressive against various ethnic groups, because they see the expression of culture as potential brooding political subversion. This is a trend especially notable in Russia and China, and must be watch.

Shoebat.com pointed out in January 2019 that tensions in Inner Mongolia and the use of the Mongolian language as a conflict was a trend that meant a potential rise in nationalism. This trend has continued to grow, with now large-scale protests in Mongolia over the treatment of ethnic Mongolians and the suppression of Mongolian culture in the Chinese-ruled Inner Mongolia region.

Dozens of protesters came together in the Mongolian capital last Thursday (1 October) to demand the release of ethnic Mongolians arrested in China in September.

Last month, ethnic Mongolian students turned against the authorities in Inner Mongolia, a Chinese autonomous region, because of a government plan to reduce the use of their native language in school curricula.

These protests and rallies in Inner Mongolia were the largest in decades, but were quickly suppressed by China with armoured vehicles deployed near the schools were tensions were the highest.

In Mongolia itself, anti-Chinese protests broke out a few days after US Secretary of State Mike Pompeo arrived in the country. The senior Trump administration official is currently scheduled to visit Japan and South Korea as well but not China.

Some protesters, who wore protective masks against the coronavirus, were dressed in traditional Mongolian clothing, and carried banners showing images of alleged atrocities perpetrated by China in Inner Mongolia.

They fear that the Chinese decision to limit the use of their language in schools will lead to the extinction of Mongolian culture.

Last month, Chinese Foreign Minister Wang Yi’s visit to Ulaanbaatar sparked protests. For Mongolian activists, Mongolian leaders should have called for the release of those arrested in Inner Mongolia. (source)