You are here: Home › Cardinal V. Cardinal As Becciu Caught Spending Over A Million Dollars Paying For False Testimony Against Pell 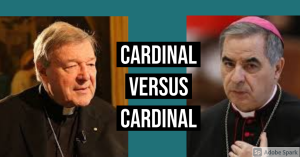 While a lot of people view the Catholic Church as a ‘stable’ entity in terms of political leadership, the historical reality for most of Church history is the opposite. From approximately the middle of the fourth century until about 1450, the Church’s leadership was characterized by complete instability, and sometimes chaos unlike anything ever seen in world history, or perhaps only very rarely. Prior to that, the Church was a hated organization that was tolerated at best and persecuted at her worst, and still had many issues to deal with. The Church for the last five centuries, in comparison with a lot of her history, has had a rather stable leadership and order, in spite of the chaos within even then.

Thus with the trend being that the Church is known for disorder, it is, from a larger view on history, an abnormal- and abnormally good -that she has had some order for a while. Thus in recent times with fighting between bishops and cardinals in the Church hierarchy, while sad and very bad, is actually not an abnormal thing. In fact, one might risk to argue that the historical trends to disorder as they were for well over a thousand years are returning to their mean and all of the very interesting and controversial detail that comes with them.

Such a case was seen lately with the exoneration of Cardinal Pell on false claims of sexual abuse and then the uncovery of Cardinal Becciu who not only has been caught in financial misappropriations and potential LGBT scandals, but now with what seems to have been paying almost a million dollars to buy false testimony against Cardinal Pell.

The strange case of a top Vatican cardinal who Pope Francis dismissed in September has just taken a Machiavellian turn that would make Dan Brown proud.

Giovanni Angelo Becciu, the Vatican’s former secretary of state and, until recently, head of the Holy See’s saint-making wing, has been accused of funneling some $800,000 of the pope’s charity money to Australia to buy false testimony against his archrival, Cardinal George Pell, while he was on trial for sexually abusing choir boys in Australia more than 30 years ago.

Becciu adamantly denies all wrongdoing, issuing a statement Monday in which he said, “I categorically deny interfering in any way in the trial of Cardinal Pell.”

Pell, who mysteriously returned to Rome last week despite a ban on Australians traveling abroad, was first convicted in 2018, and then acquitted of historical clerical sex abuse in April, after what was known as the “cathedral trial” because the alleged crimes happened in Melbourne’s main basilica. The trial in which he was acquitted came after a hung jury on the same case. A subsequent trial that involved accusations of Pell grabbing young boys’ genitals in a public swimming club, known as the “swimmers trial,” was dropped when Pell was convicted.

The Italian leaks also refer to a 39-year-old woman named as Cecilia Morogna, who is described as Becciu’s niece and reported to be involved in some of the transfers. But the investigation leaks imply that Morogna is no relative of Becciu’s at all and is in fact part of a Freemasonry Roosevelt Movement. Grainy photos run in the papers imply that she has been seen in the cardinal’s company several times in Rome.

On Monday in Melbourne, a lawyer representing the primary witness in the trial against Pell adamantly denied receiving money for his testimony. Viv Waller represents the alleged victim, whose name has not been made public because of privacy issues related to child sex-abuse allegations. She said her client’s testimony was genuine. “My client denies any knowledge or receipt of any payments,” she told reporters in Melbourne. “He won’t be commenting further in response to these allegations.”

Pell’s Australian lawyer, Robert Richter, has instead insisted that these claims of paid-for testimony be investigated. “They are concerning allegations and require thorough investigation of the money trail, wherever that may be,” he said Monday. (source)

With the appearance of more and more scandals in the Vatican, expect as a trend for the future for there to be a lot more coming out, as given the power, influence, and expanse of the Vatican into so many areas in the world, it is not just that she has secrets, but that she holds the secrets of others that may reveal further and unexpected secrets.

Report: Ten Percent Of The World Potentially Infected With COVID-19
Christian Armenia And Muslim Azerbaijan Are Now At War. Azerbaijan Just Bombed An Armenian Neighborhood And Soldiers Are Killing One Another As The United States Does Nothing And Turkey Is Using The War To Revive Its Own Empire
Follow