You are here: Home › Prepare For The Next Coming Great Jihad As Russia Warns That Azerbaijan Could Become The Next Center For Islamic Terrorists To Travel To Fight And Kill Christians

By Shoebat on October 6, 2020 in Featured, General, Highlight 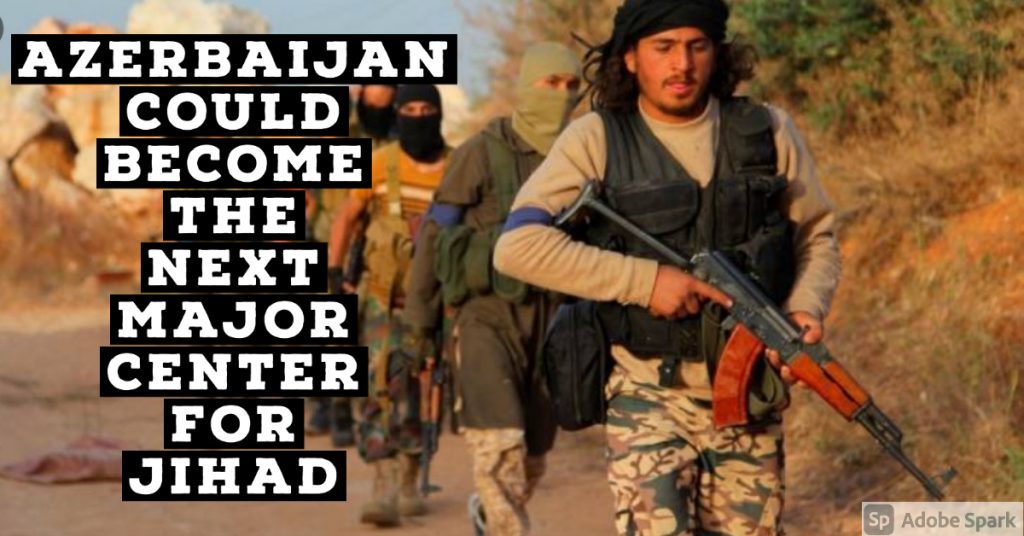 As the conflict between Armenia and Azerbaijan continues, Russia just put out a warning that Azerbaijan (specifically Nagorno-Karabakh) could become the next center for Islamic terrorists to travel. If this happens, the Islamists will be partaking in the grand jihad to fight and kill the Christian Armenians. As we read in a report from Reuters:

Sergei Naryshkin, the head of Russia’s SVR Foreign Intelligence Service, said the conflict was attracting people he described as mercenaries and terrorists from the Middle East.

“We are talking about hundreds and already even thousands of radicals hoping to earn money in a new Karabakh war,” Naryshkin said in a statement.

He warned that the South Caucasus region could become “a new launch pad for international terrorist organisations” from where militants could enter states including Russia.

It goes without saying that there is nothing far-fetched about this. Anytime there has been a major fighting ground for Muslims — be it Chechnya, Dagestan, Afghanistan, Iraq, Syria — there was foreign fighters joining in the fray. If the fighting continues between Azeris and Armenians, foreign fighters will travel to the site of battle. If you look at a map of the Caucasus you will see that Azerbaijan borders right with Dagestan, which is a Muslim country with a long history of Islamist insurgency against Russia. Also next to Dagestan are numerous Caucasus Muslim countries like Chechnya and Ingushetia, both Islamic countries with a heavy Mujahideen presence. 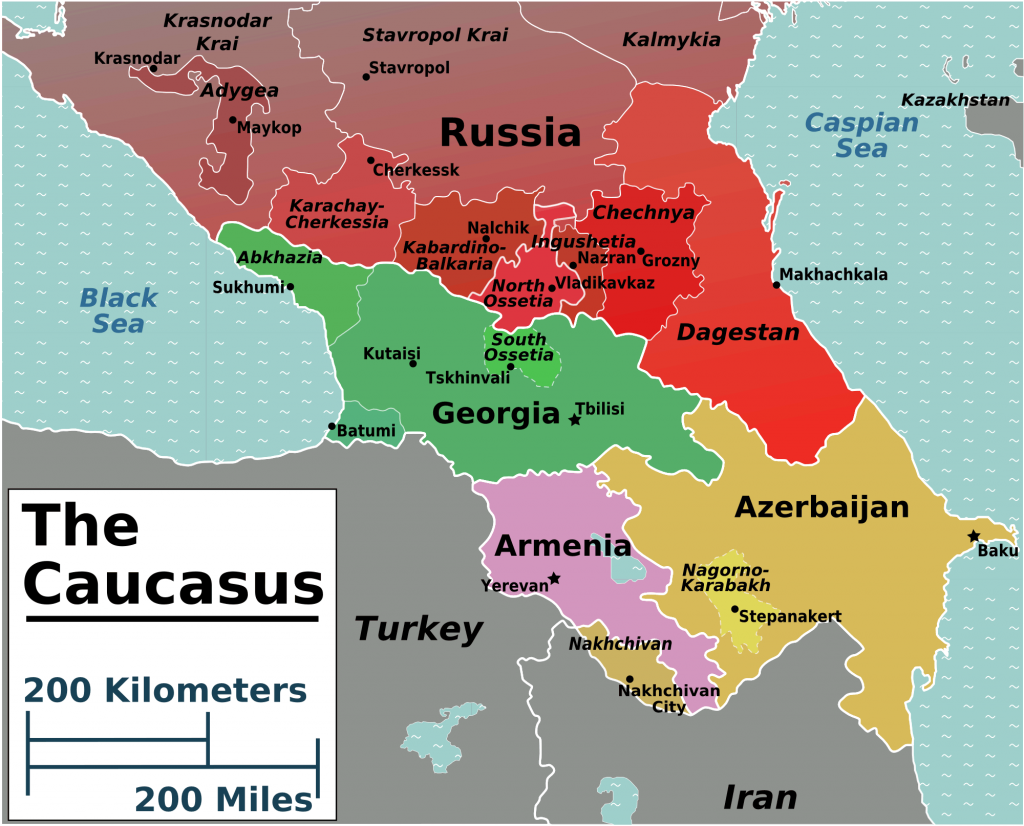 We know that jihadists would travel to Azerbaijan to fight the Armenians (if the fighting continues) because that is what happened the last time the Armenians and Azeris had a serious war in the late 80s and early 90s. Islamist fighters from Afghanistan, Chechnya and Turkey, and even Right-wing fascist paramilitary fighters from Ukraine, joined the Azeris; while Orthodox Christian fighters from Greece and Russia travelled to join the side of the Armenians. As the Greek City Times recounts:

The First Artsakh War (1988-1994) saw Greek and Russian volunteers fight alongside the Armenians. Chechens, Afghan Mujahedeen, Turkey’s Gladio Gray Wolves and Ukrainian Far Right militants fought on the side of Azerbaijan in the First War.

What happened in the Artsakh War was truly a manifestation of the Islamist-Fascist unification, which the world saw at its biggest scale during the Second World War when Muslims from Bosnia, Albania and the Middle East joined the Third Reich to fight the Allies. According to Norat Ter-Grigoryants, an Armenian lieutenant-general who was a leading figure in developing the Armed Forces of Armenia during the Nagorno-Karabakh conflict in 1992–1995, mujahideen fighters from Afghanistan, jihadists from Chechnya, Turkish ultra-nationalists (“Grey Wolves”) and Ukrainian neo-Nazis travelled to Nagorno-Karabakh to fight the Armenians:

In addition to Chechen militants, radical Islamists from Afghanistan, “Gray Wolves” and others, Ukrainian Nazis from UNA-UNSO also noted in Karabakh. In the First Karabakh War, Ukrainian neo-Nazis served in the Azerbaijani army as pilots and artillerymen.

That Ukrainian Nazis would travel all the way to Azerbaijan to fight the Armenians may be surprising to some, because many people would wonder as to why Ukrainians — being traditionally Christian — would fight fellow Christians (Armenians). For one, the Ukrainians who fought the Armenians were members of the UNA or the Ukrainian National Assembly, the very group that would later in 2014 merge with Right Sector (Azov), the pagan neo-Nazi paramilitary that fought the Russians in Eastern Ukraine. So, these people were not Christian in any way, but ethno-nationalists who worshipped race. Moreover, that these Ukrainian fascists would fight side by side with Chechens is not far fetched at all, since they fought in Chechnya against the Russians in the 1990s.  In the fall of 1994 to 1995, UNA militiamen fought for the Chechen mujahideen and their leader, Dzhokhar Dudayev, against the Russians (See Byshock & Kochetkov, Neonazis & Euromaidan, pp. 108, 118).

Another Ukrainian Nazi, Oleh Tyahnibok, who was then a member of the Social National Party of Ukraine (SNPU, which would eventually become Right Sector or Azov) and later became the head of Svoboda (a Nazi party in Ukraine), fought alongside Chechen separatists, against the Russians. Other Ukrainian nationalists, also part of the SNPU, fought for the Chechens, such as Igor Mazur, Valeriy Bobrovich, Dmytro Korechynsky, Andriy Tyahnibok, Dmytry Yarosh, Vladimir Mamalyga, and Olexander Muzychko. They fought for Chechen jihadist leaders Shamil Basayev and Ibn al-Khattab. The Ukrainian fighters trained at the base for the Ukrainian National Assembly, in Ivano-Frankivsk, and the base was called “the Ukrainian People’s Self-Defense.” The Ukrainian fighters were sadists, being known to cut throats, pull out finger nails, break fingers and gouge out eyes. The Chechens even gave one Ukrainian fighter, Okexander Muzychko, an award for bravery.

So if Ukrainian Nazis fought as allies to the Chechens against the Russians, and if they fought in the jihad against the Armenians in the 1990s, then it would not be surprising that this type of nightmare would happen again if fighting in the South Caucasus continues and intensifies. In fact, there are already reports from Greece about Greek Christians being in Nagorno-Karabakh to support their fellow Christians, the Armenians. As we read in the Greek City Times:

…it was revealed that ethnic Greeks are volunteering to go and fight in Artsakh, with one source telling Greek City Times that the first batch of volunteers amount to 30 men, while a former non-commissioned officer claimed to Sputnik Hellas that the number is as high as 500. Whatever the truth may be, it is being widely reported in Greek media that tens, if not hundreds of volunteers from Greece are going to Artsakh, motivated by religion and solidarity with Armenians, and without receiving a salary. It has also been revealed that the Greek minority in Armenia, mostly descendants of Greek Genocide survivors, are fighting alongside the Armenian army.

It is possible that a Christian Islamic war has already begun…

Corner Store Owners Beg To ‘Re-fund The Police’ After Machete Attack
Trump, A Second Stimulus Check, And The Election
Follow