You are here: Home › Turkey Wants Wars In The Middle East And The Caucasus So That It Can Take Advantage Of Chaos And Make Itself A Global Power Again

By Shoebat on October 7, 2020 in Featured, General 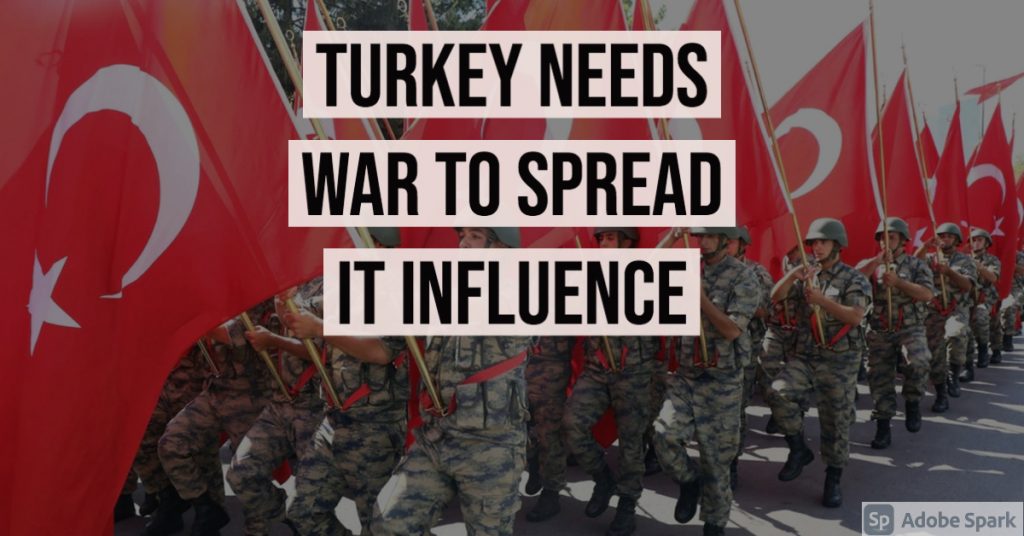 Turkey is in Libya, in Syria; Turkey is expanding itself in the Eastern Mediterranean, and now Turkey has imposed itself in the Caucasus. What is one of the main objectives of Turkey in doing all this? It is to guarantee that Turkey will always have a say in peace negotiations, and thus placing it in a position of perpetual influence, thus expanding Turkish geopolitical leverage. By expanding its sphere of influence, Turkey expands its control, and thus its hegemony, a prerequisite to empire building. The foundation of empire building is influence, being in a position to dictate terms from behind the barrel of a gun. And since Turkey is the second most armed country in NATO, it is safe to say that Turkey’s ability to execute policies of intervention, while having a respected place in negotiations, is a sign of its growing global power. When a ceasefire was agreed upon in Libya, it was Russia and Turkey that brokered it, not the United States, which really indicates Turkey’s soaring place as a hegemony (with American consent, of course).

In the post-WW1 order, Turkey has no position (the Ottoman Empire was indeed called the ‘sick man of Europe’ before its fall). But now, Erdogan is changing this old world order, and ushering in a new world order where conflict cannot be resolved without Turkey’s say so. Turkey wanted a conflict in Syria, because it would (being the most powerful of the Islamic world and a high ranking member of NATO) put it in the position of the stabilizing force of the region. The Americans gladly conceded to this, thus enabling Turkish expansion in the Near East. One Turkish source very close to Turkish politics, Emre Dogru, wrote in an email correspondence with Stratfor back in 2011 that Turkey had a plan to invade northern Syria, and that such a measure was already known by the Americans, and that it would be done only with American and NATO involvement. Dogru also said that Turkey would not invade Syria unless the Syrian civil war causes a migrant crises. As we read in the email which can be found in the Wikileaks archives:

“But Turkey has a very-well developed contingency plan that may be implemented should the need arise according to the events that take place in Syria. The plan was elaborated back in March 2011, and revised in June 2011. Turkey’s allies, including the US, are aware of this plan. The plan includes creating a buffer-zone in northern Syria (I sent specifics of this plan in another insight before – pasted below) only if the unrest or civil war in Syria 1) Creates a massive refugee crisis 2) Threatens the border security 3) Provides PKK with an opportunity to attack on Turkey more easily. But Turkey does not have any intention to take an action on Syria unless these conditions occur. Turkey will not act without US/NATO involvement anyway.”

By being Azerbaijan’s biggest ally in the current conflict, Turkey is also given a giant say so in any sort of peace talks. What this means is that Turkey is expanding its influence, and thus expanding its control, its political leverage. If there is a brokerage for peace in Syria, Turkey is a major broker; the same is said for Libya and the same will be said for the Caucasus. As we read in a report from 112 Ukraine:

By “re-activating” the conflict in Nagorno-Karabakh and changing the military-political balance of forces in favor of its ally Azerbaijan (and therefore in its favor), Turkey intends to establish itself in the region as one of the stakeholders of the local processes, guarantors of the new status quo, along with Russia, France, USA, and EU.

What we are seeing are the beginning stages of a new world order, with former powers like Turkey rising above the rubble of its destroyed past to arise again and world superpowers.