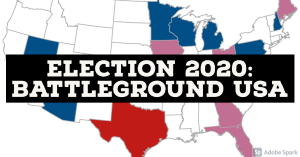 Here at Shoebat.com, I have identified about eight states as major battlegrounds for the future. With the exception of for me, Ohio, and for them, Minnesota, Politico has agreed with Shoebat.com about seven states that will be 2020 battleground areas.

Donald Trump is cratering among women in the suburbs, losing support among senior citizens and facing a wave of Democratic early voting.

With 20 days left until November 3, Trump faces as daunting a challenge to reelection as any incumbent president in a quarter-century.

Joe Biden is predicted to win in most election forecasts. He also holds a robust lead in the national polls — 10 percentage points, according to the RealClearPolitics polling average. And in the 8 states POLITICO has identified as critical battlegrounds — Arizona, Florida, Georgia, Michigan, Minnesota, North Carolina, Pennsylvania and Wisconsin — Biden has a lead in all but one of them.

The selection of these swing states is based on a variety of factors — polling, demography, past and recent election history, voter registration, interviews with state and local party officials, strategists and pollsters. The individual campaigns have also revealed the places they are prioritizing through staffing, resource allocation, TV and radio advertising and candidate visits.

When POLITICO first chronicled these swing states after Labor Day, the roadmap ahead for Trump and Biden was clear. The president needed to max out his performance with rural voters, halt his erosion in the suburbs, and turn out white working-class voters who didn’t vote in 2016. Biden needed a big turnout in the big cities — particularly among African-American voters — increase his share among Latino voters and recapture some of the places that flipped to Trump after twice voting for President Barack Obama.

While it’s too early to tell how successful each has been at meeting those goals, one thing seems clear from our most recent reporting — Trump has failed to turn his fortunes around in the suburbs, particularly among women.

“Honestly, all the moms I know, we are really nervous about our kids, what kind of future they’re going to have. And Trump is the one making us nervous,” a woman in suburban Livingston County told Tim Alberta.

Swing state Republicans aren’t entirely convinced that Trump’s situation is dire. While acknowledging the obstacles to his reelection, they are quick to point out a salient fact: Trump also trailed in polls in many battleground states at this point in 2016 only to win them narrowly on Election Day. They report high enthusiasm within the GOP base and deep support for the president in rural America — support that isn’t being captured in the polls, they say. (source)