You are here: Home › Mayor De Blasio Is Right, The Jewish Orthodox Enclaves In New York City Are Coronavirus Hot Zones And Need To Be Restricted By Anti-Covid Measures

By Shoebat on October 14, 2020 in Featured, General, Highlight 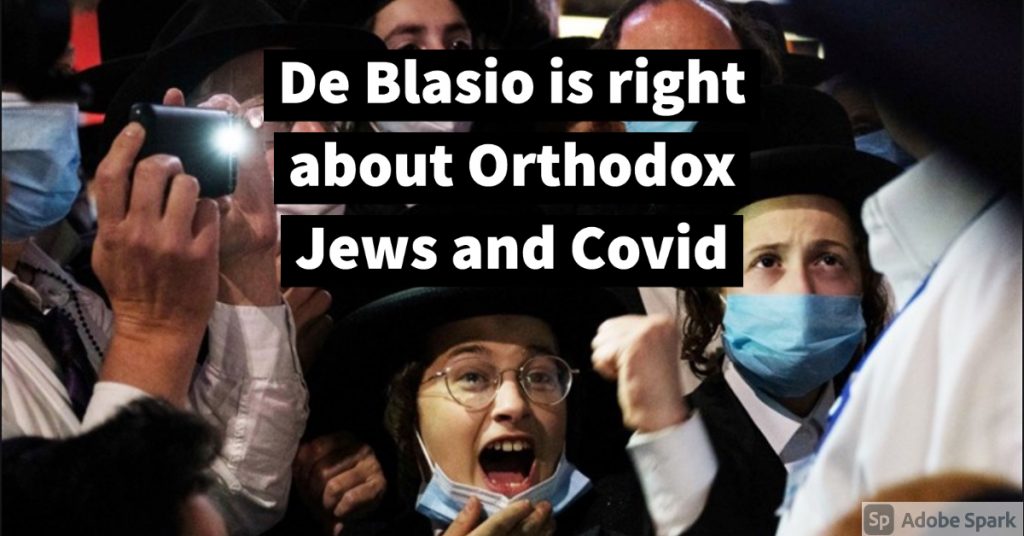 There are hot spots of coronavirus in New York City, and many of their zip codes overlap with Jewish Orthodox enclaves. Mayor De Blasio has mentioned the high uptick in covid in these areas, and of course he is being accused of antisemitism. Even Donald Trump implied that de Blasio is antisemitic when he retweeted a post calling Bill de Blasio “an anti-Semite thug piece of s**t”. Trump then added his own commentary: “Wow, what does this grim picture remind you of? I am the only thing in the Radical Left’s way! VOTE.” Trump was presenting a message that he is somehow the protector of the Orthodox Jews from evil, antisemitic Democrats. Trump is also exasperating and exploiting paranoia that de Blasio somehow hates Jews and is targeting them for no reason at all. Of course Donald Trump wants their vote; Midwood and Borough Park (both predominantly Jewish areas) voted for heavily for Trump.

The reality is that the reason why there is a high amount of covid infections in Orthodox Jewish enclaves is because a lot of the people there (certainly not all of them) are deliberately rebelling against anti-covid measures and are fomenting revolt against state rules. Recently there was a mob of Orthodox Jews who attacked a Jewish journalist named Jacob Kornbluh who has been writing on the deliberate rebelling against anti-covid measures. The mob can be seen here:

At Heschy’s urging, the crowd just surrounded and attacked journalist @jacobkornbluh. They pinned him against a wall and shouted “moyser” (“snitch”) as NYPD lost control of the situation. Really scary scene. Jacob is a pro pic.twitter.com/783MqbzTBe

And then you can see the mob, led by their rebel leader, Harold “Heshy” Tischler, accosting the journalist:

Here’s Heschy egging then on. “He’s lucky time be alive,” one of the protesters told me after.

A few yards away, cops agree to close more streets, joking around with same men who just beat up a reporter pic.twitter.com/UekTnKQqrA

Is this mob violence also the fault of de Blasio?

Is it antisemitic to point this out? If this was happening in a Muslim enclave, would conservatives not be writing about it? But, because this is happening in a Jewish area, the conservatives are calling de Blasio antisemitic. I find it funny that conservatives will not hesitate call people antisemitic while they criticize liberals for being quick to call others “racist.” The reality is that Orthodox Jewish areas are hot zones for covid, and thus tighter measures have been imposed within them. Some are complaining that Orthodox Jewish communities were not notified about anti-covid measures because they were announced during the Sabbath when Jews are not allowed to read the news. But, was it the Sabbath when a mob of Orthodox Jews did a mask burning procession:

There have been spikes in covid in Brooklyn, and that has caused restrictions to be imposed. As the New York Times reported:

Since mid-August, city and state officials say large gatherings and lax social distancing have caused a surge in new cases in pockets of Brooklyn and Queens, many of them in Orthodox Jewish neighborhoods. The spike prompted Gov. Andrew M. Cuomo to issue new restrictions on large gatherings and nonessential businesses in certain parts of the city.

And if the covid restrictions are “antisemitic” as a number of American conservatives are arguing, then why aren’t other Jews being targeted? Why aren’t secular Jews or Reformed Jews being targeted? And why are some Catholics complaining about the restrictions, with the Catholic Diocese of Brooklyn filing a lawsuit objecting to them? Are the restrictions also ‘anti-Catholic’? Or are these particular Orthodox Jews trying to misconstrue the situation to make de Blasio look antisemitic? The Sheriff’s office also broke up a rave party in Queens where over 110 people had gathered. Were these party goers all of a sudden victims of some conspiracy?

The problem is that many people within the Orthodox Jewish community are deliberately resisting the covid restrictions, hence the imposing of restrictions in those particular enclaves. As Liam Stack and Joseph Goldstein wrote two weeks ago:

Mayor Bill de Blasio ordered the Police Department and the Sheriff’s Office to enforce public health guidelines in several Orthodox Jewish neighborhoods in Queens and Brooklyn, where residents often do not wear masks or engage in social distancing. But community leaders said residents have been resisting the guidelines because of hostility toward Mr. de Blasio and the growing influence of President Trump, whose views on masks and the pandemic have been widely embraced.

Also, official statistics has shown that Orthodox Jewish neighborhoods had increased to anywhere from 3 percent to 6 percent, which is significantly higher than the city’s overall rate of between 1 percent and 2 percent. And the idea that de Blasio has been not putting in effort to inform the Orthodox Jewish is also really far-fetched. In de Blasio’s own words:

“There’s a very rigorous outreach effort in the community in English and Yiddish … There’s a substantial number of Yiddish speakers who have been brought into the effort. Test and Trace has been hiring directly from the community. We are going to keep doing that, though. I think this is an indicator we will be fighting for a little while here.”

A Jewish doctor was even accosted by two Jewish Orthodox activists, (one of them was “Heshy” Tischler). Dr. Mitchell Katz, the head of New York City Health and Hospitals, gave a public announcement in South Brooklyn, at Gravesend Park, when one of the Orthodox Jewish activists yelled at:  “You don’t live here… Get out of here.” He then shouted “Go to East New York,” a predominately Black neighborhood in Brooklyn. You can see the confrontation in this video:
And if de Blasio’s restrictions are “singling out” the Jews, then they need to explain why the Israeli government had the same struggles with its own Orthodox Jewish community. In Israel, the Orthodox Jews are the most resistant to anti-covid measures, and they are living in the Jewish state. Is the state of Israel also ‘singling’ them out? If the Orthodox Jews who hate the anti-covid restrictions are so innocent and justified in their actions, are the Jews running the Israeli government also “antisemitic”? Is the Israeli government targeting Jews? Israel has generally been decreasing its covid numbers, but its still significant in… Orthodox enclaves. According to Amos Harel:

The infection coefficient, R, has fallen to 0.8 or 0.7. That represents the average number of people infected by each patient, and it’s down from 1 or a bit more last month. … But the discussion was overshadowed by one critical fact – the high incidence of illness in the ultra-Orthodox community. At best, there are preliminary signs that the spread of the virus there is slowing. But that’s before the impact of the mass Sukkot festivities held by some Hasidic sects have become evident.

“an ultra-Orthodox member of the governing coalition, lawmaker Israel Eichler of the United Torah Judaism alliance, described police officers as storm troopers conducting pogroms in ultra-Orthodox neighborhoods. And Culture Minister Chili Tropper of Kahol Lavan admitted that the cabinet didn’t shift to a differential lockdown, in line with Gamzu’s “traffic light” plan, because it was afraid of upsetting the ultra-Orthodox.”

“I explain to people that others are looking at them, and saying that we’re in this situation because of Haredim, and that the 12 percent is infecting the 80-plus percent, and that ‘you’ are ‘stealing’ the breathing machines … And I say that this hatred is terrible, but what people see is the continuation of singing, dancing, public prayers, and simchas [celebrations] — as well as continuation of protests. … Seeing the bodies arrive and counting them, sometimes 15, 16, 17 in a day, you understand the impact this virus is having on Jewish communities … But even this doesn’t help change attitudes.”

People in the US will argue that the reason why the Orthodox have high infections is because governments did not do a good enough job informing the Orthodox community. But how come in Israel, when the Orthodox made an agreement to have only a hundred people attend a funeral, these same Orthodox Jews turned around and instead had thousands of people attend the funeral? As we read in the AP:

After a revered ultra-Orthodox rabbi died this week from COVID-19, Israeli police thought they had worked out an arrangement with his followers to allow a small, dignified funeral that would conform with public health guidelines under the current coronavirus lockdown.

But when it was time to bury the rabbi on Monday, thousands of people showed up — ignoring social distancing rules and clashing with police who tried to disperse the mass gathering.

So the Orthodox communities are not being informed enough by the government, yet these same people will dishonestly agree to the rules and then deliberately break them. It is now the fault of de Blasio because the Orthodox were doing sukkot (the Sabbath)? Yet when it was not the Sabbath a large group of Orthodox decided to burn masks, which just shows that they are indeed informed but that they are being purely rebellious. It is no wonder that in Palm Tree, NY, the area with the highest concentration of Jews in the US, 15% of covid tests come out positive. According to the New York Times:

In this town of 26,000 residents, where life revolves around family, religious services and prayer, the percentage of coronavirus tests coming back positive is at least 15 percent, among the highest in New York. There are more than 200 active cases, enough to place this Orthodox Jewish community northwest of New York City into a state-ordered “red zone” with strict new restrictions on synagogue capacity and public gatherings.

Reading all of these things, it is obvious that the reason why these enclaves (be they in the US or Israel) are high in covid is because there is an active and deliberate rebelliousness against the anti-covid restrictions. Of course Trump is exploiting this to get votes. What is ironic is that Harold “Heshy” Tischler, one of the big Orthodox voices against anti-covid restrictions, called de Blasio’s wife a “retard”. Yet, looking at such high numbers of covid in his community, I have to ask, who is the retard here? The Orthodox are not just rebellious, they aren’t too smart either.