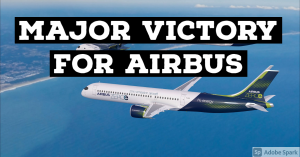 In September 2020, I noted how two major companies to watch were C. G. Haendel and Rheinmetall, as they showed close ties to the German government.

I had another company that I did not note but was on my list for possible observations, which was Airbus, as it is a major aerospace provider, and ten days after writing the above piece, received a contract to build fighter jets for the Swiss military.

Now it is at a point where I must add, making it absolutely clear that I DO NOT GIVE FINANCIAL ADVICE, that the European aerospace company of Airbus is going to be a major company to watch, since they just won a massive ruling on tariffs in favor of them against the American aerospace giant Boeing as Reuters notes.

The European Union is set to win the right to impose tariffs on about $4 billion (3.1 billion pounds) in U.S. goods in retaliation for subsidies granted to planemaker Boeing under a World Trade Organization (WTO) ruling due on Tuesday.

The decision threatens to stoke transatlantic trade tensions with just three weeks until the U.S. presidential election on Nov. 3, although it could also help at last to settle a 16-year legal battle.

Both the United States and the EU have signalled interest in settling the dispute over subsidies each provided to their respective planemakers, Boeing and Airbus, while accusing the other of refusing to talk seriously.

Tuesday’s decision, delayed by the COVID-19 pandemic, follows a WTO ruling last year allowing Washington to impose tariffs on $7.5 billion in EU goods over state support for Airbus, which has sites in Britain, France, Germany and Spain.

The state of Washington has since moved to repeal tax breaks that benefited Boeing, while Airbus has announced it will increase loan repayments for the A350 plane to France and Spain in bids to settle the matter.

The European Commission has said it would prefer a negotiated solution, but would impose tariffs without one.

It has already drawn up an extensive list of U.S. products it could target including wine, spirits, suitcases, tractors, frozen fish, and a range of agricultural produce from dried onions to cherries.

European sources have said the EU could also add tariffs on a further $4 billion of U.S. products left over from an earlier WTO case, giving it firepower similar to that Washington won in last year’s WTO ruling.

The United States says the previous award, allowing the EU to retaliate against special tax treatment for U.S. exporters, but which the EU never implemented, is no longer valid because a law creating the disputed system was repealed in 2006.

Airbus also argues that funding for its A380 plane is no longer relevant after it decided to halt production of the world’s largest jetliner due to weak sales. (source)

This is a major blow to trade between the US and Europe.

Trade wars tend to precede “hot” wars, and given the growing militarization of Europe, and specifically Germany, what happens here will be an interesting series of events to watch. However, at the current time, one may likely see increases in the opportunities for Airbus as a company.