You are here: Home › Netherlands Moves To Legalize Euthanasia For Children 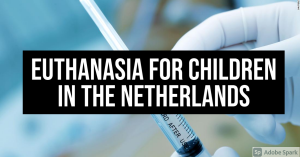 The future of a society can be seen in how it treats its most vulnerable members. It has been known for a while that a lot of European nations have seemingly given up on their will to live by the choices they have been making. I speak not of any sort of ‘racialism’ or ‘nationalism’, but rather by making consistent choices that favor self-destruction such as the lack of family formation, laziness, indulgence, and sometimes death itself. The Netherlands is a major example of this, as they have been too often a ‘leader’ in such areas, most infamously with euthanasia. Now according to the New York Post, the small nation is now moving to allow children to be euthanized.

The Netherlands is considering allowing kids 12 and under to be euthanized if they are terminally ill and have no hope of recovery.

Health Minister Huge de Jonge proposed the new policy to the States General of the Netherlands, the country’s legislature, on Tuesday, saying termination of life should be accessible for “a small group of terminally ill children,” the NL Times reported.

Currently, assisted suicide is legal in the country for babies under one-year-old and children over the age of 12 but De Jonge is concerned for the young people in between those age groups and their access to care, the outlet reported.

For terminally ill children “who agonize with no hope, and unbearable suffering,” between the ages of one and 12, doctors can only provide palliative care or withhold nutrition until a patient dies, the outlet said.

This has created what doctors call a “gray area” between traditional palliative care and active assisted suicide, leading them to ask for more regulation, De Jonge said, according to the outlet.

De Jonge said the proposed policy will only affect between five and ten children each year who are suffering “as a result, in some cases unnecessarily, for a long time, without any prospect of improvement.” He said “the best possible care” for this group of kids is of paramount importance, the outlet reported.

Legislators against the policy said it was improper to push the change less than 6 months before the country’s next election while De Jonge countered it is a measure necessary to protect kids and will allow for more transparency to the aforementioned “gray area.”

The said it will make doctors more accountable to parents and will provide a basis for reviewing and assessing individual cases, as is already done for euthanasia situations currently allowed. (source)

It is bad enough that a society kills its own children in the womb, and now it is moving to kill them after being born.

What future can one have in a situation such as this, when the Muslim immigrants to the Netherlands do not do this generally, and they have families? It is not the Muslims’ fault, but rather those who value death before life.