You are here: Home › Trump Says He May ‘Flee The Country’ If He Loses The Election 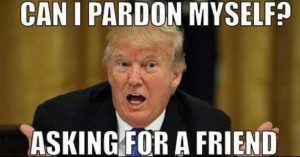 At a recent campaign rally, President Trump joked as reported by TheHill.com that if he loses the election, he may have to ‘flee the country’.

President Trump joked that he would “have to leave the country” if he loses the upcoming presidential election against Democratic nominee Joe Biden.

“I will deliver optimism, opportunity and hope, and that’s what we’re doing, and this is why we have this kind of spirit, and I hate to say it because I don’t want to insult Georgia, but it’s this way all over our country,” Trump told a cheering crowd at a campaign event in Macon, Ga., on Friday, later mocking the social distancing and face coverings at Biden’s campaign events.

“Maybe I’ll have to leave the country? I don’t know.” Trump added.

Trump told a crowd of supporters at a campaign rally in North Carolina last month that “If I lose to him, I don’t know what I’m going to do. I will never speak to you again.”

Biden’s campaign featured the president’s comments in its own video on social media.

Trump also joked in 2016 that if he lost the Republican nomination for president, he would not remain in the public eye.

Trump can say this is a joke, but it really is not, since Trump may face real charges. This is not just an accident or a “left wing” issue, but has been discussed for a while now.

As I have noted, the best hope the Republicans have to possibly rebuild their base will be a Biden victory, but that will take a lot of work. A Trump victory means success for the Republicans now, but likely a severe reckoning in the future.

But Trump? He is facing many problems, the most likely one that is of the greatest note and interest being related to his debts and taxes. Regardless, Trump’s statement, assuming a loss (which at this point is questionable) one must wonder if he would try such a thing.

At this point, it is just to wonder, watch, and see what path the current trends take in the political reality show, as both carry with them major consequences for all.