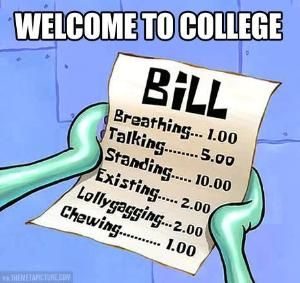 One of the trends that I have identified and have been discussing is the nature of college and university tuition prices. Based on what I have seen, there is no way for the current method of operation to continue in that of constantly rising prices amid dropping salaries for graduates seeking employment, as the reason hy . From a business viewpoint, the return-on-investment is just not worth the effort any more. As a result, two things will have to happen:

This has become exacerbated because of the effects of COVID-19, which have forced the nature of university education itself not to be abolished, but restructured in various ways, including more online learning. However, the overall mentioned above trends towards lowerd tuition have not caught up yet, and to the great anger of many students.

But this may be changing, for the Christian Post notes that multiple Christian colleges are moving to freeze their tuition rates.

In recent times, multiple private Christian colleges and universities have garnered headlines for decisions to either freeze or reduce tuition costs for students.

Houghton College in Allegany County, New York, announced earlier this month that it was cutting tuition from $33,920 this year to $15,900 starting next fall.

Liberty University of Lynchburg, Virginia, announced in September that it was continuing a tuition freeze for both online and residential students for a third year.

Daniel Nelson, chief institutional data & research officer at Bethel University, has worked with the Council on Christian Colleges and Universities on research regarding financial aid. He explained to The Christian Post that efforts by some Christian schools to cut or freeze their tuition costs have been developing over the past few years.

Nelson reported having found eight Christian schools that engaged in what he labeled a “tuition reset,” which meant they “dropped their sticker price substantially.”

More recently, he found that “three more schools, just in the last month or so, have announced that they’re doing the same.”

He believes it is “a start of a trend” that will likely exist even after the coronavirus pandemic has ended.

“I predict that this will continue and there will be many more Christian colleges that will do something on the pricing and discounting side in the next year or two,” he said.

“Because the forces that were in place prior to the pandemic were already pushing us in this direction and the pandemic just is going to be pushing some of these schools over the edge.” (source)