You are here: Home › Report: One Million At Risk Of Going Hungry In New York City 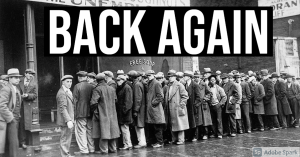 Food insecurity is ultimately driven in most cases by politics, since many nations have the ability to produce food, but because of political interference they are unable to feed themselves. Even in the absolutely horrible famine that befell 18th century Ireland, it was worsened directly by policies such as those under Lord Trevelyan, who preferred to keep taking the food tax on the Irish, knowing that they were starving, because he believed as a pious Protestant that it was the ‘will’ of God that the Irish should be ‘educated’.

Right now, America is a food-rich nation, but some people in light of the disruptions caused by COVID-19 are reporting food shortages so much that it jeopardizing according to Fox 5 NY approximately one million New Yorkers.

The lines are long and the need is enormous. More than 1 million New Yorkers can’t afford food, and standing on long lines at food banks is now too common amid the pandemic.

“We have done disasters before but nothing is even close to what we are doing now,” Alexander Rapaport, the executive director of Masbia soup kitchen network, told FOX 5 NY.

Masbia soup kitchen network opened 15 years ago. It has locations in Borough Park and Flatbush in Brooklyn and in Forest Hills in Queens. Rapaport said he has seen a 500% increase in demand.

An estimated 1.5 million New Yorkers cannot afford food, according to the New York Times. Their only lifeline is a food pantry.

“I’m on a limited income. I visit every two to three weeks,” said Denise Allen, a mother of one.

Rapaport said there is so much need. So much so that for the last three days, Rapaport, his staff, and volunteers have been operating around the clock. All three locations are now open 24/7, feeding 1,500 families a day, but it is still not enough, he said.

Instead of making people stand on a long line for hours, Masbia has transitioned into what Rapaport called digital lines. You now have to make an appointment to pick up your box of food. (source)

The US once had bread lines in the 1930s, or about a century ago, and as the trends for employment and job stability are again suggesting, this trend is in the process of repeating.