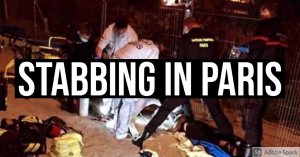 One of the trends to wach for in the future is going to be anti-Muslim sentiment in Europe, because while there is a lot of racial tension, it becomes mixed with legitimate concerns about the behavior of certain members of Europe’s Islamic groups, and added to that is the continued behavior, whether a part of a strategy-of-tension or not, that reinforces the worst feelings against the Muslim communities. The result is a ball of rage and hate that leads to violence and death. In the case of Europe, it could be enough to provoke violence to the point of national and even conflict that is continent wide.

It is with interest then that a story from the UK Metro notes that two French women have been arrested stabbing two Muslim women while screaming “dirty Arabs.”

Two Muslim women were ‘stabbed repeatedly’ under the Eiffel Tower in a suspected racist attack in Paris.
Police arrested two white female suspects who allegedly shouted ‘dirty Arabs!’ as they launched the attack.

They are being held on suspicion of attempted murder, city prosecutors said.

It follows rising tensions over the beheading of a teacher in the Paris suburbs last Friday by a radicalised terrorist infuriated that cartoons of the Prophet Mohammed were shown to children.

Members of France’s five million plus Muslim community have complained of increased Islamophobia caused by a government clampdown on mosques and Muslim organisations.

The victims of the latest attacks on Sunday have been identified as French women from an Algerian background named only as Kenza, 49, and Amel, who is a few years younger.

Kenza was stabbed six times and ended up in hospital with a punctured lung, while surgery was carried out on one of Amel’s hands, said an investigating source.

No information was initially released about the attack on, leading to uproar on social media, where confirmed images from the scene circulated.

A chilling video records screaming as the stabbings are carried out on Sunday evening.

It was not until Tuesday that a statement from Paris Police read: ‘On October 18, at around 8pm, the police intervened following an emergency call from two women wounded by knives on the Champs-de-Mars’ – the Field of Mars by the Eiffel Tower.

A source at the Paris prosecutors’ office confirmed on Wednesday: ‘An investigation for attempted murder has been opened in connection with the stabbings.’

One of the attacked women wore a face covering, but it was not clear whether this was because of the Coronavirus pandemic, or for cultural or religious reasons, said the source.

Kenza told Liberation newspaper: ‘We were a family, five adults in all and four children.

‘We had gone out for a walk. At the level of the Eiffel Tower there is a small rather dark park, we took a little tour in it.

‘As we walked, there were two dogs that come towards us. The children got scared. My cousin, who was veiled, asked the two women if it was possible to keep their dogs with them because the children were afraid.’

The dog owners refused to put their animals on a leash, and a furious argument followed – one that included racist insults.

It is then – around 8pm and in darkness – that the two women with the dogs allegedly pulled out a knife, and launched themselves at Kenza and Amel.

‘One of the two took out a knife, she slashed me on the skull, on the back on the ribs and there was a third blow on the arm,’ said Kenza. ‘They then attacked my cousin.’

‘Dirty Arab!’ was heard, according to witnesses, and ‘Go home to your own country’.

‘Call the emergency services, she stabbed him,’ was also heard, as well as ‘Let go, you big beast!’

Two local shop workers then intervened and held one of the attackers down until the police arrived. The second suspect was arrested later.

Details about the stabbings come as the President Emmanuel Macron prepares to lead a National Hommage to Samuel Paty, the 47-year-old teacher who was stabbed to death last week by Russia-born killer, Abdullakh Anzarov, 18.

The beheading happened outside the Bois-d’Aulne school in Conflans-Saint-Honorine, north of Paris, where Mr Paty taught French and Geography. (source)

I have noted before that many of Europe’s Muslims need to- and I say this with complete respect to them -get themselves together, really try to stay low, not to provoke the Europeans, and even consider heading to another country or back to the Middle East.

I don’t say this to be racist at all. Rather I say it for their protection, because people in Europe are starting to become very upset again. The last time this happened, about a hundred million people died in a global war that laid complete waste to the European continent.

Right now, there is a sense among a lot of people in Europe that they feel they are being ‘replaced’ and ‘invaded’. Shoebat.com has discussed this many times that it is a combination of factors, including self-inflicted behaviors from the Europeans. But that said, it is never wise to ‘kick an angry dog’ even when it seems to be ‘down and out’, because eventually that dog may bite, and in the case of Europe, it could result in another genocide directed at the Muslim peoples and for practical purposes anybody who does not look ‘European’.

Events like this are not just ‘isolated’. They are a reflection of real social agnst boiling underneath the surface of many people’s minds, and one should not be surprise to see a trend in more attacks such as this as well as nationalism, militarism, and eventually, if not stopped, eugenics.

Hence why I warn that the Muslim peoples and migrants may want to reconsider their home in Europe. This is not to encourage racism, but rather that they might live, since if one was a Jew and living in Germany in 1930 and realized the signs of the times, would one not take measures to protect oneself while there was still available time?