By Andrew Bieszad on October 24, 2020 in Featured, General, Highlight 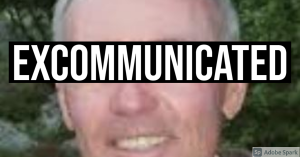 There are many visions from God which are approved by the Catholic Church. However, there are a lot more which are not or are condemned because they are either the well-meaning but fanciful projections of human minds onto spiritual matters, scams using religion to get money and power, or preternatural manifestations masquerading as sacred.

In recent times, the Medjugorje apparitions, which have attracted people from around the world, seem to fit into the second above-mentioned category. The “vision” have been condemned by the Vatican, and in another recent update to what has become a decades-long saga, the main former priest associated with the apparitions, Tomislav Vlasic, has been excommunicated.

A laicized priest who had been the spiritual director to six people who said they experienced visions of the Blessed Virgin Mary in the Bosnian town of Medjugorje has been excommunicated.

Tomislav Vlasic, who had been a Franciscan priest until he was laicized in 2009, was excommunicated July 15 by a decree of the Congregation for the Doctrine of the Faith in the Vatican. The excommunication was announced this week by the Diocese of Brescia, Italy, where the laicized priest lives.

The Brescia diocese said that since his laicization, Vlasic “has continued to carry out apostolic activities with individuals and groups, through conferences and online; he has continued to present himself as a religious and priest of the Catholic Church, simulating the celebration of sacraments.”

The diocese said Vlasic has been the source of “serious scandal to Catholics,” by disobeying the directives of ecclesiastical authorities.

When he was laicized, Vlasic was forbidden from teaching or engaging in apostolic work, and especially from teaching about Medjugorje.

He was in 2009 accused of teaching false doctrine, manipulating consciences, disobeying ecclesiastical authority, and of committing acts of sexual misconduct. (source)

This act is really the end of a long saga, in a sense, in the Church that has been a source of scandal, but in light of the nature, reflects on the need to be aware of spiritual matters.

We are living in very difficult times, and all of the trends in the world incline towards violence and war. Thus it is not uncommon to believe that spiritual deceptions will appear, and cuase may issues for many people.

Not every mystical experience is good or is from God, and experience does not mean that one is in an appropriate place with God either.

Rather, what matters always is truth, and the willingness to follow it to its natural conclusions.

So be aware, be ready, and remember that as the economic and political situations deteriorate, many will look for spiritual answers, and there will be many traps set up to deceive people into following a path that ends but only in misery, ruin, or both.

The Trump Administration Declares To The Whole World: ‘No One Has A Right To Have An Abortion.’
Trump Changes Religion To Non-Denominational Christian
Follow