You are here: Home › Trump Changes Religion To Non-Denominational Christian 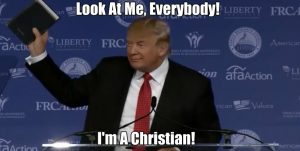 Religion and politics is a funny thing, since often times, politicians us religion for extending their own power without any regard to the principles of the religion in question.

Some people love Trump. Some hate Trump. Some have other feelings. I am not going to comment on those feelings. However, in what may be one of the most obvious examples of religion as a political tool, Trump, who has identified as a “Presbytarian” publicly (but never going to church or showing any serious signs of belief at all) has now changed his religion to a ‘non-denominational Christian’ according to Fox News.

President Trump, who has long identified as a Presbyterian, now considers himself a “nondenominational Christian.”

Trump shared his change in religious identity in a written statement to Religious News Service.

“Though I was confirmed at a Presbyterian church as a child, I now consider myself to be a nondenominational Christian,” Trump wrote, without giving an explanation for the transformation or saying when it occurred.

Trump has a loyal base among white evangelicals, who in 2016 helped propel him to victory. (source)

“Non-Denominational” Christianity is the modern form of Unitarian Universalism for the right wing- you can believe whatever you want as long as the American flag is waving and nationalism is present.

But seriously, this is the essence of the matter. Trump does not go to church. He shows no signs of believing in God at all. He shows no Christian virtues in his behaviors. I’m not saying one cannot say there are good things he has done- the fact is that a man is measured by his actions, and Trump’s main principle that he worships is clearly his own ego and image. Love or hate his leadership, that is not the matter when it comes to morality, for even very evil leaders in the moral sense can be excellent or respected politicians (such as Emperor Qin).

Trump is not a Christian. He is a politician, and he is using religion to appeal to his dwindling evangelical base, for they are critical in all swing states to securing his re-election.