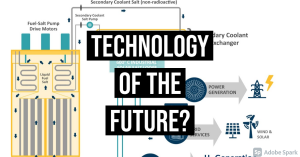 One of the trends for the future that I have noted multiple times is going to be the ‘miniaturization’ of nuclear technology so that one will be able to generate power cleaner and under potentially more ‘localized’ circumstances. This is of particular interest in that Popular Science notes that new developments in ‘molten salt reactors’ that are also much cleaner burning and hold major potential for the future.

A new molten salt reactor design can scale from just 50 Megawatts electric (MWe) to 1,200 MWe, its creators say, while burning up nuclear waste in the process.

That means that while scientists first developed molten salt reactors decades ago, they’ve never had the opportunity, King says, to gain public favor. The combination of factors is redolent of politics and human whims, seen over and over when major technology is introduced.

Startup Elysium Technologies is behind the new molten salt design, and it scales from tiny to huge, partly because the Nuclear Regulatory Commission (NRC) will require a very small reactor plant as an exemplar and pilot project. Elysium is far from the only molten salt reactor in the game—a 2019 NRC presentation lists Elysium and seven others in the molten salt column of an advanced reactor table.