You are here: Home › Image Of The US Slips In The Eyes Of The World 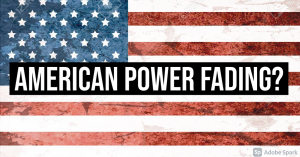 The US has been the undisputed global superpower for a long time. However, all things change. No empire lasts forever, and according to the LA Times reported by Yahoo! News, the image of the US in the eyes of the world is changing, with people looking away from her.

In the eyes of much of the world the United States is a potent, yet faltering force, a conflicted nation heading into an election that will either redeem it or tug it farther away from the myths and promise that for generations defined it in capitals from Singapore to Paris and Buenos Aires to Nairobi.

The stature and standing of the U.S. have plummeted in recent years, a number of international polls suggest. That trend has been exacerbated this year by what is widely perceived to be a disorderly and ineffectual governmental response to the COVID-19 pandemic, and now by a chaotic electoral process.

For some, a once-bright beacon of egalitarian values has faded into an aloof, disfigured power.

“The United States was always a model to follow,” said Gloria Jácome Torres, a 41-year-old lawyer in Mexico City. “Since I was a student, I always viewed the United States with admiration — everything they did there with respect to human rights, the level of education, personal liberties.”

But particularly during the last four years, her view has been soured by what she sees as a pattern of cruelty and callousness emanating from U.S. officialdom, as seen in the mistreatment of migrants and racial injustice laid bare.

In many parts of the world, a broad sense of disillusionment directed at the United States cannot be laid solely at the feet of President Trump, who began his term in January 2017. Particularly in regions such as Latin America and the Middle East, where the U.S. for decades propped up repressive regimes, historic grievances long predate Trump’s headlong America-first presidency.

Still, this year’s presidential campaign pitting Trump, a Republican, against former Vice President Joe Biden, a Democrat, marks something of a role reversal for a country long accustomed to calling on volatile or repressive states elsewhere in the world to hold free and fair elections. This time, the International Crisis Group, a nonprofit conflict-resolution organization, suggested Thursday that foreign leaders “urge respect for democratic norms” as Americans go to the polls. (source)

The trend to watch will be a transition from the US being looked at as a leader in the world to one among several competing entities, mirroring what happened in the early twentieth century that lead up to the first and second world wars.