You are here: Home › Biden Victory? Blue Wave? Not So Fast Say The Financial Analysts 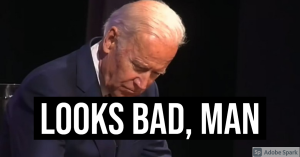 One of the sectors of the economy that is quick to pick up on political trends is the financial sector. These people do this for reasons of necessity- finance is directly affected by politics, and because they know they are vulnerable to shock, they try to stand ready to make quick decisions about major issues.

In response to the recent mediz pro-Biden blitz, one can say that things are not as secure as one might imagine. In fact, according to Zero Hedge, major financial groups such as Goldman Sachs are warning their clients not to put too much faith into the predictions because Trump may win.

With just one week to go until the Nov 3 election, Goldman’s Alessio Rizzi finds that options markets are still pricing uncertainty beyond Election Day, “partly due to the risk of a contested election.”

As has been discussed ad nauseam before, the Goldman strategist writes that a clear result with less uncertainty on fiscal policy could be supportive for risky assets, and that “a decline in volatility and related uncertainty can boost investor sentiment which has historically been weak ahead of the election and has improved afterwards.” To wit, he notes that in the months post elections, S&P 500 3m implied volatility has usually decreased (although it is safe to say that extrapolating the future from any previous election would be borderling idiotic).

None of this is new. What is, however, is that one day after JPMorgan flipped the latest Wall Street narrative – the one where a Joe Biden victory and a Blue Sweep would be the best outcome for stocks – on its head, instead now suggesting that a Trump victory is the “Most Favorable Outcome”, and would push the S&P to 3,900, Goldman appears to join this latest bandwagon, warning that a Blue Sweep is no longer guaranteed, something we first observed late on Sunday when we wrote “Odds Of A “Blue Wave” Tumble, Hammering Risk”

This is how Rizzi spins the latest data: “since the end of September, according to prediction markets and Superforcasters, the likelihood of a ‘blue wave’ has increased and with it the prospect of larger fiscal spending which could drive a rotation into more reflationary assets.” (source)

Now Ted, Walid, and I have been advising that the chances are in favor of Trump all along, but that is not what many believe. In fact, owing to political circumstances, it is likely that Biden will win the popular vote by more than before, but Trump will take the electoral college, and that is all that matters.

The political left may be confident, but they likely do not have what it will require for them to win.

So for now, things are looking better for Trump than what they seem. Ignore the spin, and focus on the fundamentals, as such is not just good advice now, but for any time in a period of controversy.

A Last “Hurrah” For Texas?
Biden Is Just Sad
Follow