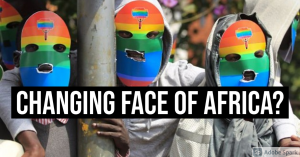 Nigeria is one of a few nations in the world, and a literal handful of somewhat powerful ones, that have a strong prohibition against sodomite behavior. However, they have often come under pressure from the rest of the world to submit to the will of sodom. Thus it is interesting that according to a recent ruling from a Nigerian judge and reported on by ThomsonReuters, forty-seven men facing sodomy charges have had their cases thrown out.

A judge in a Nigerian court on Tuesday threw out a case against 47 men charged with public displays of affection with members of same sex due to the failure of prosecutors to appear in court and call witnesses to complete their case.

The trial, heard in commercial capital Lagos, was widely seen as a test case for a law introduced in 2014 that bans same-sex “amorous relationships”.

The law carries a jail term of up to 10 years.

The men were arrested in a police raid on a Lagos hotel in the city’s Egbeda district in 2018. Police said the men were being initiated into a gay club, but the defendants said they were attending a birthday party.

Prosecutors failed to attend a hearing at the federal high court in Lagos, having previously failed to present witnesses in a case that had been adjourned on several occasions.

Justice Rilwan Aikawa struck out the case and said he had done so due to the “lack of diligent prosecution”.
The Nigerian law banning gay marriage, punishable by a 14-year prison term, and same-sex “amorous relationships”, prompted an international outcry when it came into force under former Nigerian President Goodluck Jonathan in 2014.

Prior to the court’s judgment, prosecution and defence lawyers in the case told Reuters nobody had yet been convicted under the law.

Some of the men previously told Reuters they had been stigmatized as a result of the raid and a televised news conference held by police in which they were identified the day after their arrest. (source)

This will be a trend to watch for, as indications are of this all over Africa, that the power of the LGBT may be rising, and it will be to be determined what path the nations of Africa take, for the trend can go either way. The question is, will it be on the path away from or into Sodom?

“Patriot Churches” Are Growing In Popularity
A Last “Hurrah” For Texas?
Follow