You are here: Home › “Patriot Churches” Are Growing In Popularity 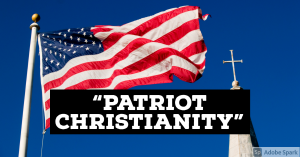 One of the trends that I have noted is the link between religion and nationalism, specifically within all forms of Protestantism, since while theology was cited as a reason for the revolt, it is ultimately a question of nationalism manifesting in the form of theological disputes that are not new, but a constant problem of Christian history going back to the ancient world. The Catholic answer has always been the same, in that the Church partakes of both the rulers and the ruled while binding and separating them at the same time, never binding herself wholly to one government or political system, since Christ did not come to establish and earthly kingdom, but rather to bring people to His Heavenly Kingdom through His bride, who is the Church.

Ultimately when one goes outside of the Church, all religion will eventually, given enough time and circumstance, will deteriorate into a nationalistic endeavor. This is seen consistently throughout history, and it cannot stand up to the encroaching paganism of the masses.

It is interesting to note this historical trend in the context of the current trend reported on by MSN News where there are now emerging “Patriot Churches” that openly espouse Christianity with nationalism.

The new congregation is gathered in a barn in Lenoir City, Tenn., with a roof that has a 60-foot American flag painted on it. And they are praying for a Trump landslide.

Standing in a circle, the dozen or so men and women, young and old, lay their hands on their pastor, Ken Peters, as he raises their requests to God.

He prays that “communism and socialism and transgenderism and homosexuality and abortion will not have their way in this land.”

He prays that the nation’s “Christian roots” will remain, that the church of Jesus Christ will be a “restraining power.”

“God, this nation is a miracle for you,” Peters continues. “You rescued us, and you gave us our independence for a purpose.”

After another “amen,” the service begins with everyone’s hands raised to “Here I Am to Worship,” a popular contemporary Christian song performed in many evangelical churches.

This is a Patriot Church, part of an evolving network of nondenominational start-up congregations that say they want to take the country back for God. While most White conservative Christian churches might only touch on politics around election time and otherwise choose to keep the focus during worship on God, politics and religion are inseparable here. The Tennessee congregation is one of three Patriot Churches that formed in September. The other two are near Liberty University in Lynchburg, Va., and in Spokane, Wash., and Peters says he is talking with several more pastors of existing churches who want to join them.

The 50 or so people in attendance may identify as born-again or just as generic “Bible-loving” Christians. Peters’s flock is not affiliated with a specific denomination, but it does have a distinct identity. The Patriot Churches belong to what religion experts describe as a loosely organized Christian nationalist movement that has flourished under President Trump. In just four years, he has helped reshape the landscape of American Christianity by elevating Christians once considered fringe, including Messianic Jews, preachers of the prosperity gospel and self-styled prophets. At times, this made for some strange bedfellows, but the common thread among them is a sense of being under siege and a belief that America has been and should remain a Christian nation.

Since 2016, much attention has been drawn to the 80 percent of White evangelicals who voted for Trump. And experts say that support is best understood in the context of Christian nationalism.

Sociologist Samuel Perry, co-author of the new book “Taking America Back for God,” says no other factor better predicts a vote for Trump than adherence to a Christian nationalist ideology. Poll data shows it is also a stronger predictor of Americans’ attitudes about race, gender, Islam, family/sexuality issues and mask-wearing than traditional political ideology. More than one-third of Americans say this country has always been and is currently a Christian nation, and 40 percent of Americans agree that God has granted the United States a special role in human history, according to the Public Religion Research Institute. (source)